• As Lagos lawyer tackles Keyamo over outburst on #EndSARS panel 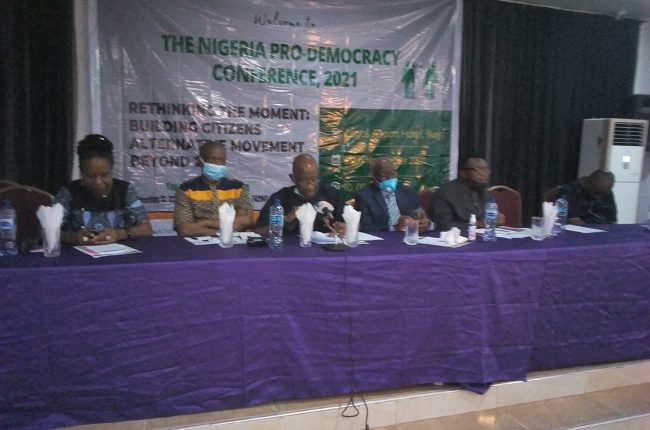 Lagos lawyer, Mr Femi Falana (SAN), Prof Toye Olorode, other rights activists and Civil Society Organisations, including Owei Lakemfa, Ken Henshaw, among others, on Monday, in Lagos, demanded a new political order, preferably the socialist system, stressing that such can better serve the interest of Nigerians.

Falana and others made this call while speaking at the Nigeria Pro-democracy conference, 2021 themed: “Rethinking the Moment: Building Alternative Movement Beyond 2023,” held at Airport Hotel, Ikeja, even as they condemned the present political order, describing it as a capitalist in nature and reason it failed to serve the interest of the masses.

According to them, the socialist alternative is a credible way out for the country and better than the present political order, which they viewed as neo-colonists, declaring that the alternative being sought was a consensus among the civil society organizations and would be an improvement from the existing order and much more beneficial to the citizens

Speaking at the event, Falana argued that a new Nigeria was possible if members of the civil society can form their own political party that would defend the interest of Nigerians, urging the masses not to be confused but mobilize and change the current political system during the election.

The senior advocate argued that a masses-oriented political party should be the focus for civil society actors, adding that the interest of Nigerians must be the priority of those seeking to effect true change.

“There is a need to change the political system and tell the people that a new Nigeria is possible and we can only have it if we are prepared to organise politically by forming our own political party, a party that will not distribute money to get votes.

Lakemfa, on his part, noted that the importance of the socialist system for the country, but said some were sceptical of it due to a lack of understanding of the system, just as he described the capitalist system as dehumanizing.

According to him, “Socialists build their own party together and together own it. In a capitalist system, the rich form the party and pay people to be members of the party.

“Capitalists enrich themselves and their cronies, socialists want an inclusive country.”

Also speaking, a lawyer, China Williams, said Nigeria is a state that needed a surgical operation to bring things to normalcy, as, according to him, those in government were doing things that would aggravate the issues in the country “base on what we are seeing and experiencing.

“If we look at the state of the nation today, what will we conclude on is that what we can do is to build an alternative political platform. We have left the country in the hands of those who don’t know how to govern,” he said.

This was just as Ken Henshaw, in his submission, while also canvassing for a new political order, said the government in the country had deliberately inflicted more hardship and poverty on the people, adding that and the ruling class would do everything to remain in power.

Prof Olorode, in his keynote address, argued that there was a need to activate the citizen solidarity movement, saying that the movement should start immediately and not wait until after the 2023 General Elections.

He, therefore, urged for collaboration among civil actors, adding that there was a need to reinvent historical struggles of political change in the country.

Speaking on #EndSARS report and the controversies trailing it, Mr Falana (SAN), said Lagos State, as a sovereign state within the federation, had the constitutional and legal power to set up a judicial panel of inquiry on any issue.

Falana spoke in reaction to the Minister of State for Labour, Mr Festus Keyamo’s (SAN), description of the #EndSARS Panel set up by the Lagos State government as illegal, saying that the junior minister’s view had no basis legal basis.

“Nigeria is governed by law. The Lagos State government sets up a judicial enquiry, it was not an enquiry set up on the directive of the Federal Government. When you say that, you insult the state, which is a sovereign within the federation.

While citing previous cases of judicial panel of enquiry in the country set up by the federal and state governments, he said murder is a state offence in the constitution and not a federal offence.

“When someone now says that the panel in Lagos is illegal because it has investigated federal officers, with profound respect, he is not talking law. That is not the law,” Falana stated.

Falana, who recalled that the military withdrew from the Lagos panel after its initial appearance based on very bad legal advice, adding that, pointed out that the panel relied solely on documentary evidence from the officials of the government.

“The Lagos panel relied solely on documentary evidence from the officials of the government. In fact, exhibit A, the first document tendered before the panel was produced by the LCC which captured the events of October 20, 2020, but the camera was later disabled,” he said.

“A few weeks ago, President Buhari told the US Secretary of State that he is waiting for the reports from the state governors and he will implement them, but our friend said on Sunday on Television that he is speaking on his behalf and not as a minister. You can’t draw a dichotomy between your private views and the views of the government that you are part of,” he added.