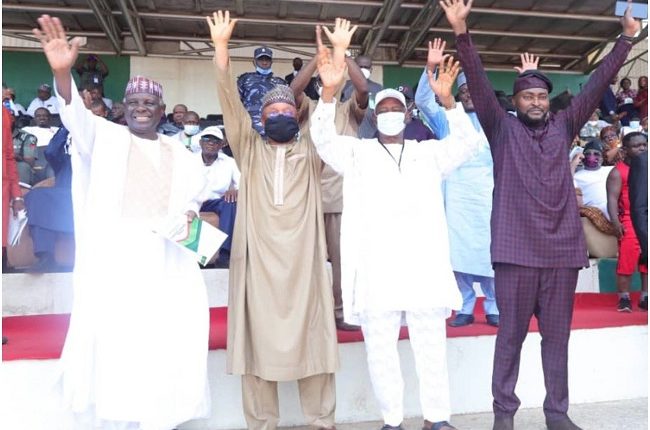 Two former ministers, Prof. Jerry Gana and Humphrey Abah alongside four others were formally reunited into the People’s Democratic Party (PDP) on Saturday.

Others that were formally readmitted at the Zonal Congress of the PDP which held in Makurdi, the Benue State capital are; Amb. Esther Audu, Hon. Adakole Ijogi and Amb. Bagudu Hillson.

He appreciated Senator David Mark and others who variously led the reconciliation delegation and described PDP as the party of purpose and a party that has all the potentials to be able to move the country forward.

“We are happy to be back,” Gana said and added that Nigerians rely on the PDP to rescue the country from the doom it is headed.

“I, therefore, urge the PDP to mobilise together and be united to rescue Nigeria and restore good governance, ensure the security of lives and property and instil confidence in the minds of all Nigerians.

While recalling that PDP before 2015, controlled five out of the six states in the North Central Gana lamented that as of today, the party is only in Benue State and stressed the need to reclaim all the other five states back into the PDP fold in the next elections.

“Now that we are back, we will do our best to remobilise, rebuild and reunite the party to take up the mantle of leadership come 2023,” Gana said.

In spite of the huge investment in the water sector by the government and international organisations, water scarcity has grown to become a perennial nightmare for residents of Abeokuta, the Ogun State capital. This report x-rays the lives and experiences of residents in getting clean, potable and affordable water amidst the surge of COVID-19 cases in the state…Ex-ministers Gana Ex-ministers Gana

The Lagos-Ibadan railway was inaugurated recently for a full paid operation by the Nigerian Railway Corporation after about a year of free test-run. Our reporter joined the train to and fro Lagos from Ibadan and tells his experience in this report…Ex-ministers Gana  Ex-ministers Gana