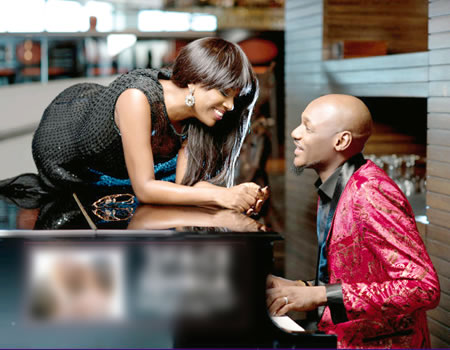 2face Idibia’s wife, Annie has sensationally revealed that all the men she dated before she met his music super star hubby were  distractions.

The Nollywood actress, who got married to 2face some years back in Dubai disclosed that she had goosebumps all over her body  the first time she met 2face also known as 2baba.

The mother of two in a question and answer session with her fans on her Instagram page late Thursday night and monitored by R revealed that dating other men before she finally settled down with 2face who has five kids with two other women,  was a distraction.

When asked why she loved her husband so much, Annie revealed that she was yet to really understand how or why, but added that “love does not ask why most times.”

She further revealed that she was completely blown away by the simple smiles on 2face’s face when the first time she met him, adding that nothing would make her leave him.

Asked if she was interested in having more kids, Annie said she would rather concentrae on building her home and with focus on her acting career.

Annie also revealed that no matter the temptation to be with another man, she would always be with the man she has loved all her life-2face.

“There is no other man I want to meet that is better than my husband. He’s the only man I have loved all my life. Every other men were distractions,” she said.

Annie who turns 34 in November,  said her new movie project comes up next year even as she explained that she keeps learning every day to become a better version of herself as an actress.

IN CASE YOU MISSED THIS TRENDING NEWS

Mr Somadina Okafor and his wife are presntly cooling off in Ekwulobia Police Station over an alleged sacrilege they committed in their hometown, Okpo village, Ekwulobia, in Aguata Local Government Area of…READ MORE

A businesswoman, Monsurat Ogundipe, has urged an Agege Customary Court in Lagos State  to dissolve her 14-year-old marriage to  her husband, Sheriff,  due to denial of sex  and  lack of…READ MORE

IN recent times, there had been an upsurge in the involvement of both former and serving security personnel in criminal activities across the nation, one of the most recent celebrated cases being that of one Michael Adikwu, a dismissed policeman who was arrested after being declared wanted in connection with the April…READ MORE

What I tell my husband now when he calls me, ‘my dear’ —Kemi Akala

My life as the First Lady of Oyo State has not been different from my present state. I thank God for everything about my life. Though I was always busy when we were in government, I see myself as busier now because I have more responsibilities. It is a combination of the continuity of some responsibilities in government and my…READ MORE

THE defection of the senator representing Kogi west senatorial district, Dino Melaye, to the Peoples Democratic Party (PDP), generated ripples on Sunday as the Kogi West Elders Forum (KWEF) of the party rejected attempt to impose the senator as the automatic as the candidate of the…READ MORE

SENATE President Bukola Saraki has given a tacit endorsement to the second term for Governor Nyesom Wike of Rivers State next year. Saraki spoke when he has laid the foundation for the construction of the…READ MORE

I have a crush on Biodun Okeowo — Olushola Micheals