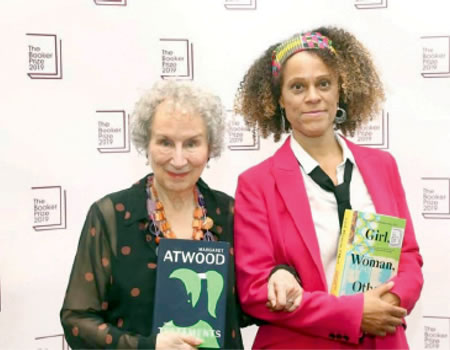 The Booker Prize is here again, and history is being made alongside the feat. Nigerian-British writer, Bernadine Evaristo, has emerged a joint winner of the 2019 edition of the prestigious literary prize.

She will split the fame and the £50,000 prize attached to it with 80-year-old joint winner (a legend actually) – Margaret Atwood, who is winning the prize for the second time.

But Evaristo makes history as the first black woman ever to have received the prize since its creation in 1969, and the second person with a Nigerian blood flowing in them to achieve the feat after Ben Okri brought home the prize 28 years ago with his blockbuster novel, The Famished Road (1991).

The announcement was made on Monday (October 14) at a ceremony at London’s Guildhall, and was broadcast live on the British Broadcasting Corporation.

Atwood’s The Testaments (a sequel to her The Handmaid’s Tale) won her the prize, while Evaristo’s polyphonic novel Girl, Woman, Other earned her her place on that pedestal.

It’s the third time the Booker Prize has gone to two joint winners. The first instance was in 1974, when it went to Nadine Gordimer and Stanley Middleton. The second and most recent case was in 1992 when Michael Ondaatje and Barry Unsworth were announced winners.

A change in rules allowed only one author to win the prize from 1993 on, but the judges decided to ignore that change in picking the winners of the 2019 edition.

Gaby Wood, the literary director of the Booker Prize Foundation, said: “Over an agonising five hours, the 2019 Booker Prize judges discussed all of the much-loved books on their shortlist, and found it impossible to single out one winner.

“They were not so much divided as unwilling to jettison any more when they finally got down to two, and asked if they might split the prize between them. On being told that it was definitively against the rules, the judges held a further discussion and chose to flout them.”

Evaristo said after the announcement: “I hope that honour doesn’t last too long. I hope other people come forward now,” then she thanked the judges.

She spoke very graciously about how thrilled she was to be sharing the prize with ‘the legend that is Margaret Atwood’; but added later that “it would have been even more thrilling to have beaten that legend into joint second place.”

According to the Guardian UK, that decision to split the 2019 Booker Prize between two joint winners has been serially vilified by people who felt that the first black woman ever to win Britain’s most prestigious literary award has had to share it – while receiving half the usual money.

Apparently, it’s a season of double honours for Nigeria, as Edo State-born Jude Idada has also been declared the winner of the 2019 Nigeria Liquefied Natural Gas literature Prize.

In his emotional acceptance speech, Jude dedicated his NLNG literature prize to “everyone living with sickle cell anaemia” whom he described as ‘warriors’.

But he also dedicated the award to his niece, nicknamed Boom Boom, the inspiration behind the book.

“This award is for everyone; the last three finalists, the 12-year-old girl that was also a contender and one of those cheering me all the way. We will keep winning,” he said.

Boom Boom is a children’s book that is told in the first person, through the eyes of a child as he grapples with the familial bonds of love, friendship, loyalty and trust in the face of impending doom.

Idada was a pure science student in high school without any background in the arts. He initially applied to study Medicine in the university but later, he changed his course of study to Agricultural Economics.

After a couple of semesters in agriculture, Idada quit studying Agricultural Economics and stayed at home for nine months after which he got admitted to the University of Ibadan to study Theater Arts where he had his first degree.

In the course of his career, Idada has won several awards, including the Association of Nigerian Authors prize for literature in 2013.

He was selected as one of the screenwriters for the Toronto International Film Festival’s Adapt This! and the Afrinolly/Ford Foundation Cinema4Change projects.

Idada was also an inaugural participant in the Relativity Media/AFRIFF Filmmaking project. He is the Artistic Director of the Africa Theatre Ensemble in Toronto, Canada.

Idada has stage plays, collection of short stories, poetry to his credit.

Pauline Tallen, Waje, others join Hebert Wigwe at the ‘Walk for Women’s Health’