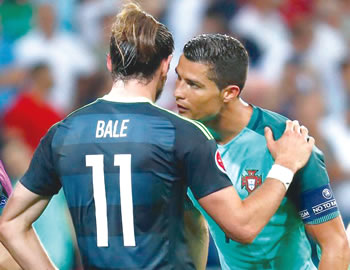 Cristiano Ronaldo has revealed what he told Gareth Bale after leading Portugal to the Euro 2016 final at the expense of Wales with a 2-0 scoreline.

The two most expensive players in the world faced off in Lyon, with Ronaldo notching a goal and an assist to secure his country’s second European Championship final in the last four tournaments.

Ronaldo walked straight over to his Real Madrid team-mate at full-time, with the pair sharing words and a hug, and the 31-year-old has now divuldged mostly what was said.

“I congratulated them on their run,” Ronaldo told reporters. “They had an amazing run. They were the shining star here, the revelation team.

“I wished them good luck and as for the rest I would rather not say.”

Ronaldo, it will be recalled, scored one of the goals in the victory over Wales, to match Michel Platini’s nine-goal Euro record.