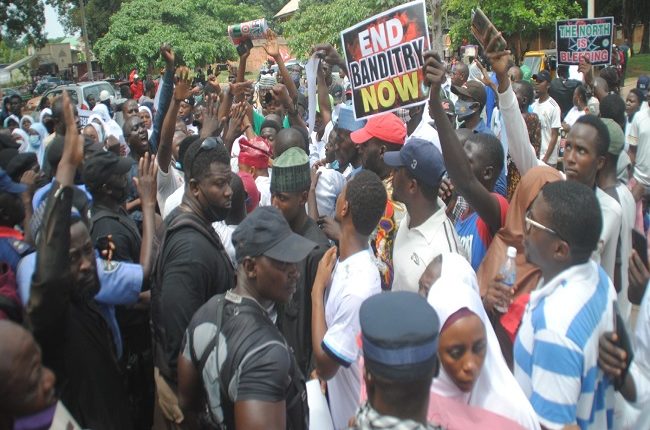 Hundreds of youths under the auspices of the Coalition of Northern Groups (CNG) took the major streets in Kaduna in protest in the early hours of Thursday morning calling on the Federal Government to end the incessant kidnapping, armed banditry and terrorism bedevilling Northern Nigeria.

The youth conveyed at Muhammad Way and trekked to the House of Assembly as early as 9:30 am holding placards some of which read, “The North is Bleeding”, “Stop the Killings in the North”, “End Boko Haram Now”, “End Banditry Now”, “Empower SWAT to End Insecurity”, “All Lives Matter”.

At the Assembly, spokesman for the group Sa’ad Bako contended that though they are against the reported harassment of citizens by the operatives of the disbanded Special Anti-Robbery Squad (SARS), the North’s problem is not SARS, but insecurity.

He further demanded an immediate end to banditry, terrorism and kidnappings in Northern Nigeria.

Even though armed security men barricaded the Assembly complex and prevented the youth from gaining access to the complex, they, however, sat on Coronation Crescent, the road which led to the Kaduna State House of Assembly and they prevented traffic flow.

They vowed not to leave the road until the State House of Assembly Speaker, Hon. Yusuf Zailani comes out to listen to their demands.

The protesters said the armed security personnel should go after the kidnappers and bandits killing citizens daily instead of scaring innocent citizens at the assembly gate. 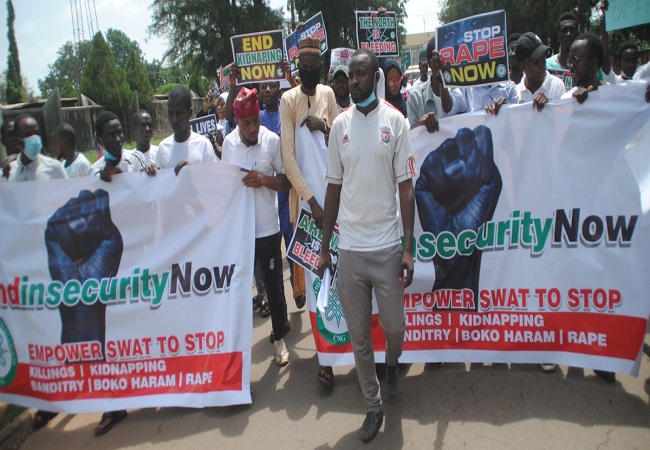 A spokesman for the youth, Sa’ad Bako, told the representative of the speaker that they were tired of the incessant killings, kidnappings, cattle rustling, banditry and terrorism in Northern Nigeria.

Bako then presented the protesters’ written demands to the representative of the Speaker.

Responding, the Speaker’s representative Tanimu assured the protesters that their demands would be given consideration and actions would be taken on them.

He, however, appealed to them to be peaceful in their protesting and avoid taking laws into their own hands.

The protesters after then left for Lugard Roundabout where they continued chanting and singing. They later dispersed around 1:30 pm with a promise to converge on the roundabout by 9:00 am on Friday for a continuation of the protest.