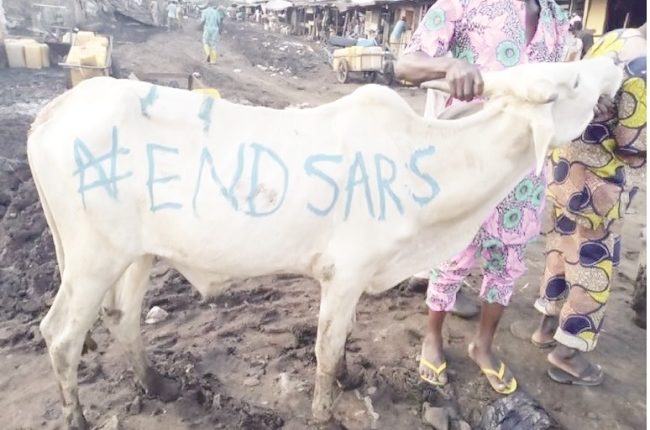 Protesters in Ondo State on Wednesday resumed on the streets, despite the state government’s imposition of 24-hour curfew, mounting barricades in many areas to prevent movement.

At least nine people were said to have been shot in Akure, the state capital and in Ondo town by security operatives who were moving around the town to disperse the protesters.

The shot protesters were rushed to various hospitals within the area for medical attention while no death recorded.

In Akure, the affected protesters were shot between Ilesha Garage and Cathedral junction while the defiant youth mounted roadblocks with bonfires at every junction.

Some hoodlums irked by the shooting joined the protest and moved to the state secretariat of the All Progressives Congress (APC) and torched the building after bringing out some bags of rice and other items and set them on fire.

Apart from food items, laptops, plasma TV, chairs, tables and other things were burnt by the hoodlums who remained there waiting for security operatives.

In Ondo town, some hoodlums were said to have hijacked the protest and attempted to set the Yaba police station on fire, but men of the police command at the station resisted the attempt.

However, it was gathered that the hoodlums headed to the premises of a new generation bank and set two vehicles on fire.

An eyewitness explained that the traditional ruler of the town, Osamawe of Ondo, Oba Victor Adesimbo, sent some emissaries to the protesters, but said some hoodlums who are determined to attack the police station set two of the vehicles of the emissaries on fire.

He disclosed that two women who joined the protesters were felled during the process, but could not confirm if they were dead or still alive.

However, checks around the Akure metropolis revealed that some anti-riot police have been deployed to major streets while some of them were seen clearing roadblocks.

The police Public Relations Officer (PPRO) who confirmed the incident said he has not been briefed.