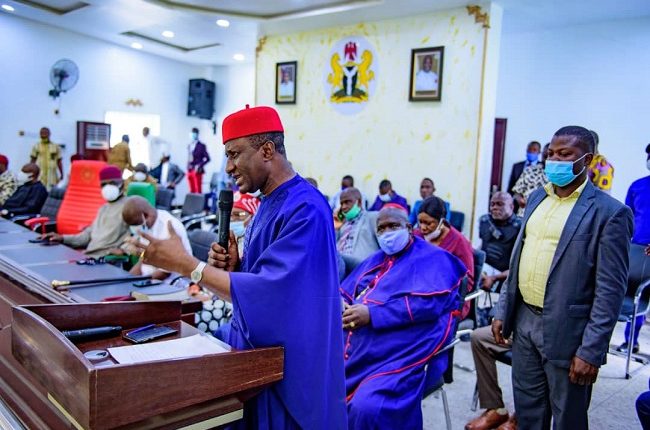 In the wake of violence which followed the initial peaceful #EndSARS protest, the Federal Government has called on youths to engage in constructive dialogue with the government in making their demands and not to allow hoodlums take over the process.

Minister of State for Mines and Steel Development, Dr Uchechukwu Sampson Ogah, who gave this advice during a Special Stakeholders Town-Hall Meeting in Umuahia, Abia State, praised the maturity exhibited by the youths when they began the protest.

He said: “The voice of the #EndSARS protests, which resonated loudly across the states of the Federation and even outside the shores, showed the capacity of Nigerian youths to challenge the status quo and their resolution to demand a better country not only for themselves but for generations yet to come.”

In a statement by Tine-Iulun M. A, on behalf of Acting Director of Press & Public Relations Department of the ministry, the minister said the government had already taken steps to address their grievances.

He, however, regretted the hijack of the protest by hoodlums and condemned the series of violence that resulted in colossus damages and other nefarious activities that have cast an ugly shadow on the beauty of the peaceful protests, downplaying its gains.

He stressed that no society could prosper from conflict nor can any nation thrive in anarchy, pleading with every citizen of Abia, especially the youths, to join hands with the authorities to profer solution and eschew violence.

Dr Ogah noted that violence and carnage would only set the country back, saying infrastructure destroyed, will be repaired with taxpayers money, monies which would have been channelled to areas that will enhance better living.

The minister sympathised with those who lost their loved ones, the wounded and those whose rights were severely violated as a result of their encounter with the recently disbanded Special Anti-Robbery Squad (SARS), and assured of Federal Government’s commitment to ensure that justice is done to each and every victim.

In his remarks, the Abia State Governor, Dr Okezie Ikpeazu, called on all stakeholders to deploy everything within their powers to appeal to the youths to desist from the destruction of public and private properties.
NIGERIAN TRIBUNE