End in sight to Ondo House of Assembly crisis? 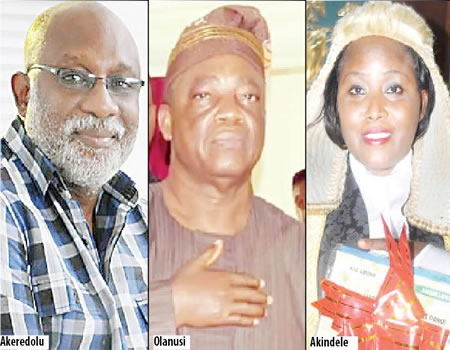 HAKEEM GBADAMOSI writes on the crisis that engulfed the Ondo State of Assembly over leadership crisis and the efforts of the state governor, Rotimi Akeredolu and other stakeholders towards ending the crisis.

AFTER about two months of leadership turbulence in the Ondo State House of Assembly which split the eighth Assembly into two equal halves,  peace seems to be returning to the hallowed chamber. This is followed by the intervention of the state governor, Mr  Rotimi Akeredolu and other political stakeholders within and outside the state.

The resignation of the embattled speaker,  Honourable Jumoke Akindele, (Okitipupa 1 constituency), who was accused of corruption by some lawmakers, leading to her unceremonious impeachment by half of the 26-member legislative body in the state, seems to be the needed step to put the Assembly back on track.

Eight lawmakers from the then ruling Peoples Democratic Party (PDP) government in the state had teamed up with the five All Progressives Congress (APC) to sack Akindele, in defiance of the constitution, which stipulates that only two-third majority can impeach the Speaker. The lawmakers specifically accused Akindele of corruption, following the arrest of the Assembly Paymaster, Adesina Makanjuola, on whom was said to have been found the sum of N15 million which was illegally withdrawn from the coffers of the assembly, on the directive of the former Speaker.

In what could be likened to a legislative coup, 13 out of the 26 lawmakers impeached Akindele, who was the first female Speaker in the state and subsequently picked Malachi Coker as the acting Speaker. The development led to serious leadership crisis and political tussle between the two opposing factions before the House was sealed off by the state police command to maintain law and order.

However,  Akindele pointed accusing fingers  in the direction of the now ruling party in the state, APC, as the instigator of the crisis. She equally accused the PDP lawmakers, allegedly said to be part of the plot against her, of seeking  political relevance in the new dispensation in order to retain their seats.

Some analysts however picked a hole in Akindele’s allegation, saying that, with the coming of Akeredolu, a new power equation will definitely emerge which will not make it political expedient for her to continue as the Speaker of the House, having hailed from the same Southern Senatorial District with the state deputy governor of the state, Agboola Ajayi.

Akindele had repeatedly declared at every fora, her willingness to step down and resign as the Speaker of the Assembly, hinging her decision on the new political arrangement in the state but hammered on the need to put some measures of stability in place before the emergence of a new Speaker and other principal officers of the state legislative house.

Many political analysts aligned with the position of Akindele that the lawmakers are only trying to save their political future and continued relevance. For those who believed in this school of thought, most of the lawmakers  got their seats through the influence of former governor, Olusegun Mimiko. They further asserted that the affected lawmakers seemed to be in a hurry to align with the new power base, even before the inauguration of Akeredolu as the new occupant of the number one seat in the state, after PDP lost power to APC in the November 26, 2016 governorship election in the state.

A similar scenario had played out in 2009, when Mimiko was declared the state governor when the administration of the late former Governor Olusegun Agagu was sent packing by the judiciary. Many of the lawmakers in the House, then controlled by PDP, jumped ship to work with and pledged their allegiance to the Labour Party government.

All efforts of the immediate past governor, Dr Olusegun Mimiko, to settle the crisis within the state assembly failed to yield positive results and the situation remained the same until the inauguration of Akeredolu, last month. Since his assumption of office, the governor has held series of meetings with the two groups in the state House of Assembly, individually and collectively, calling for truce, but the two groups stick to their guns.

Some political observers in the state were of the opinion that the crisis within the House is at the prompting of some political interests who believed that Akindele, as the Speaker and some principal officers had stepped on toes in carrying out their duties. They particularly pointed at the impeachment of the former deputy governor during the Mimiko administration, Alhaji Ali Olanusi, who joined APC at the wake of 2015 general election, as the major albatross of the Speaker.

“Many political pundits faulted Akindele’s removal, saying her  impeachment did not conform with the two-third majority stipulated by the Constitution in Section 92 (2) (c) for impeachment of principal officers and the House Rules that stated that a simple majority is needed to suspend her and other principal officers.”

Olanusi was impeached immediately the House resumed its legislative duties after the election. The former deputy governor was said to be interested in the crisis in the Assembly because of the way his impeachment process was handled in 2015 by the Seventh Assembly. He is however currently challenging the impeachment in court as  gathered that Olanusi wants it reversed by the lawmakers in order to be entitled to retirement benefits as a former deputy governor in the state.

One of the consensual suggestions made during the various meetings with Governor Akeredolu was that both Akindele and Malachi should step aside for the lawmakers to sit and elect new principal officers. But it was gathered that the arrangement changed with the state deputy governor, Agboola Ajayi allegedly giving the Malachi faction a surreptitious backing to sit at the House of Assembly to legitimise his (Malachi) faction under current administration, when the governor was out of the state. However, the police intervention in sealing up the House of Assembly Complex may have scuttled the planned sittings by Malachi and his supporters.

The position of the state government on the leadership of the House took a dramatic twist, penultimate weekend, when Governor Akeredolu tactically recognised Malachi as the Speaker during the swearing-in of the Secretary to the State Government. The development has not only raised dust, but also further fuelled the anger of the Akindele’s group who perceived the governor as taking side with the Malachi faction.

The faction in a statement signed by the Chairman, Committee on Information, Honourable  Siji Akindiose, said it perceived the alleged tactical recognition of Malachi during the swearing-in of the SSG as an endorsement of illegality and maintained that Akindele remains the Speaker. As stated in the statement, the group averred that “the House of Assembly, under the law, remains under the leadership of the Speaker, Rt. Honourable Jumoke Akindele and other principal officers of the House.

“In line with our resolve to bring to an end the crisis in the Assembly, we have participated actively in the reconciliation process which led to the withdrawal of the case in court in deference to the intervention of the governor. The intervention of the governor had also led to the stoppage of the plot by some members to hold an illegal sitting in the House, last Tuesday.

“It is therefore strange to us to see that the protocol of the government would recognise a wrong person as Speaker of the House, while reconciliation is ongoing. We see this as a suspicious plan to take advantage of the withdrawal of the court case and we utterly disagree with a plot to subvert the constituted authority of an arm of the government.”

The action of the Akindele’s group necessitated a rescheduled meeting of the factions by Akeredolu, penultimate weekend, where it was resolved that the Speaker and her principal officers should formally resign from their posts, while the leadership of the Malachi faction should also be dissolved. Subsequently, Akindele and her officers, last Monday, thread the path honour by keeping to their part of the agreement.

The lawmakers hinged their decision to resign on the new political arrangement in the state after the coming on board of Akeredolu, saying the new geopolitical arrangement and configuration in the state call for the action. They stated in a letter that “Our resignation has become imperative in the face of the new geopolitical configuration of the state so that peace, which is the hallmark of any administration, will continue to reign in the land. Moreover, we are desirous of moving the state forward for the benefit of our people”.

The letter, according to a source was the first step towards ending the crisis as agreed by the two factions during a meeting with Governor Akeredolu. The other part of the agreement reached at the meeting with Akeredolu, was that the other faction should also dissolve its leadership in order to pave way for the election of new principal officers of the eight House of Assembly in the state.

The two factions seem to have fulfilled their own part of the agreement which may put an end to crisis. While the crisis appear to be heading towards solution very soon and the governor would thus  be able to settle down to work thereafter, but political pundits concluded that the crisis in the Ondo State House of Assembly signified the shape of what to expect in the political terrain in the state.  The 26 lawmakers have indeed already divided into two equal half and unless some of the lawmakers cross carpet, which is not impossible,  the House may  remain divided in dealing with legislative issues.

In all this, one thing that is crystal clear is that most PDP lawmakers who worked against Akindele Speakership may dump the party for APC. Though this is expected as some of the lawmakers would seek to play to the gallery with the carrot allegedly being dangled before them and dance to the tune of the government of the day, more importantly in order to remain politically relevant.