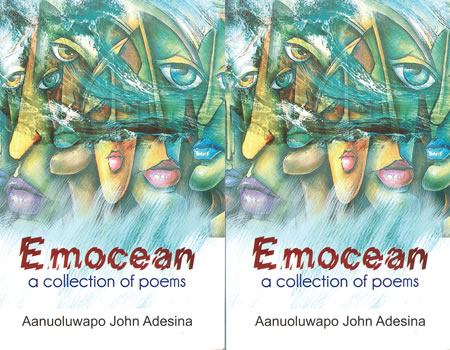 If the poet says his writings were birth from oceans of emotions, then it is not a fallacy. The everyday life is filled with issues that every human must partake in, which the poet obviously has experienced, hence making his collection of poems a reality of life.

‘Emocean,’ embedded with themes of love, culture, pain, death, shows the transition of life that depict’s that humans  could start happy, in love, in bliss, yet having a turnaround in situation, influenced by environment, change and growth causing unfavorable incidences.

The first section consisting 18 sonnets draws attention to the poet’s knowledge of life that nothing is forever. He pursues his vanity at some point to show that life should be enjoyed when one can, by exploring food, thought of being with a lady, drunkenness, and love.  ‘If tomorrow’, ‘Nandos sonnet’, ‘Lady of the cup’, ‘Be mine’, and ‘Valentine’s day,’ expatiates his new interests.

As he moves on, there is change, which signifies the human world, and the race which is not planned for. Soon, he moves on to another reality, that life is a game of chance. In the other thirteen sonnets, he dissects the emotions of pain, of agony, death, the transition from bliss, with reference to cry from gunshots, the firing squad, loss, crisis in Nigeria amidst others. He does not only tell stories that cause these pains but sympathizes with victims.

The second section of the collection features another 28 awe-inspiring and well-structured poetic lines. He examines the lost identity of Nigerians who felt inferior to the white man hence costing her freedom over the years. The poet is not happy and shows disinterest at the embracement of the white man’s culture, which has led to the loss of the African roots, especially Nigeria. The poet brilliantly beautifies his verses with rhymes, assonances and consonance which would make any reader flow with the subjects of the poems.

In his free verses, one would stumble on the poet’s attention to nature, he adores creation, infuses sexuality, the human body, the feelings that can’t be avoided towards the opposite sex.

‘Emocean’ on a wide discourse also refers to actions of human lives that could cause anyone to sit and realize the vanity of the world. He questions wickedness, cruelty, bestial nature of man, betrayal and the continuous web of lies man is spins in.

The last two sections, the ‘Haikus’ and “Villianella’ slowly move on to the life after life on earth; death. He writes about ‘Eternal rest’, ‘Pointless life’, and ‘Heaven’.

‘Emocean’ is not only an insightful anthology from the eye of a young man, it is worth reading, giving any reader the moment to realize again the vanities of everything in a wide and thought-out emotions.

To reform or not to reform government agencies—A review