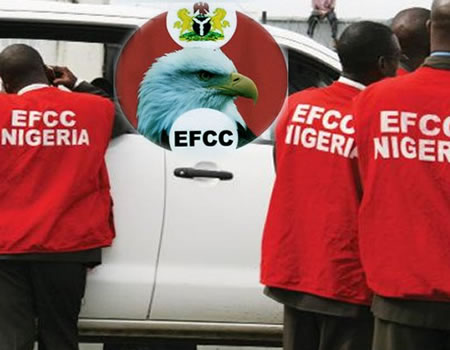 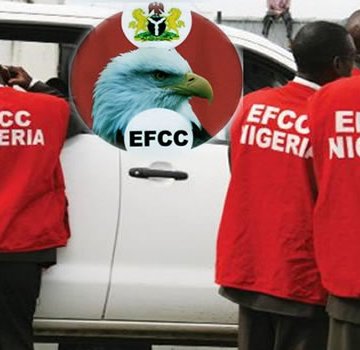 THE Federal High Court in Abuja on Tuesday ordered the Economic and Financial Crimes Commission (EFCC) to deposit the fine of N12.5 million imposed on it for infringing on the fundamental rights of Senator Abdulaziz Nyako with the Chief Registrar of the Court.

The N12.5 million fine was imposed on the anti-graft agency for arresting and detaining the Senator for three days and freezing all his bank accounts for over two years without a court order, or charging the Senator to court.

The fine was part of the judgement delivered by the court on June 22, 2016 in favour of the son of the former Adamawa State governor, Rear Admiral Murtala Nyako.

In a ruling delivered yesterday in an application by EFCC for stay of the execution of the judgment, Justice Kolawale struck out the motion on notice for lacking in merit adding that, there was no circumstantial situation to warrant the stay of the judgment since no cogent reason was placed before the court to enable it use its discretion in favour of the anti-graft agency.

The EFCC had, in a motion on notice prayed for stay of execution of the judgment against it, complaining that, it will not be able to undertake its statutory functions if the N12.5 million fine is paid to the Senator.

The anti-graft agency also informed the court that it had filed a notice of appeal in respect of the judgment of the Federal High Court and that it will be in the interest of justice to delay the payment of the fine till the final decision of the Court of Appeal on the issue.

But, Justice Kolawale disagreed that the EFCC will not be able to function because of the fine, adding that there was no substantial point of law but sentimental arguments canvassed by the agency to pray for stay of execution.

The judge agreed with Nyako that EFCC’s motion was a ploy to deny him the fruit of his success in his court case against the EFCC and that there was no special circumstance to warrant the grant of stay.

The court held that it had powers to grant stay in the execution of money judgement but said that such discretional powers must be seen to be judicially and judiciously exercised as required by law.

Kolawale also agreed with the respondent that his arrest and the freezing of his account for over two years was a gross abuse of his fundamental rights as a serving Senator and a responsible citizen of the country adding that the claim of the EFCC that the fine will hamper its performance, was not tenable because EFCC is adequately funded by the Federal Government.

Besides, the judge also upheld the submission of the respondent that more than a year after the judgement had entered against EFCC, the compilation of records by the agency for transmission to the Court of Appeal had not been done and that the period allowed by law had expired.

He therefore held that the EFCC should within, 30 days issue a bank draft in the sum of N12.5 million in the name of the Chief Registrar of the Federal High Court and that the registrar shall open an interest yielding account in a reputable bank of his choice with the draft

The Judge said, in the event that the anti-graft agency failed to deposit the bank draft within 30 days, the respondents shall have the right to apply for garnishee order nisi (to take directly from the EFCC’s account).

Earlier, Justice Kolawole had lambasted the EFCC for claiming that the court issued a judicial fiat in respect to the judgment adding that the EFCC, as an organisation established by law should learn how to conduct its statutory functions within the ambits of the law

He frowned at the habit of the security agency for rushing to magistrate courts to obtain detention warrants in the matters where magistrate courts have no jurisdiction adding that such habits amount to nothing but corruption on its own.

“In this instant case, EFCC cannot be said to be a diligent party, having just filed notice of appeal in a judgement delivered over a year ago and did not raise any grounds of special circumstances to granting of the stay of the execution of the judgment.

“The EFCC should wake up and realise that the law that established it is not a cosmetic law but designed to protect the Nigerian citizens from acts of recklessness in the name of performing statutory functions.

“Let me say here that it is a political slogan that security agencies cannot be subjected to court order when it goes out of its way to infringe on the fundamental rights of the citizens.

“The act of arresting and detaining before investigation is bizarre and must not be condoned by any law court. Dumping suspects on remand through magistrate court orders in matters where magistrate courts have no jurisdiction is not only tragic but unfortunate and this trend must be stopped, the security agencies must realise that Nigeria is now been governed through democratic process,” the court held.