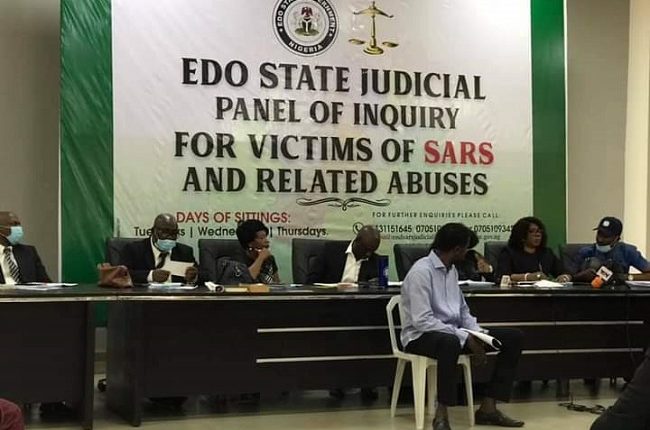 Members of the Edo State Judicial Panel of Inquiry on Police Brutality and other related matters, otherwise known as the EndSARS panel, have expressed worry that more than two months after it submitted its report to Governor Godwin Obaseki, the governor is yet to start the implementation of the recommendations.

In a letter dated September 30th, 2021, and endorsed by eight of the panel members and addressed to Governor Obaseki, the members said the governor had promised that he would begin the implementation of their recommendation not later than 14 days after its submission, but over two months after receiving the report, the governor had not acted.

The members, to underscore the level of their frustration over the matter, marked copies of the letter to the Secretary to State Government (SSG) and the Chairperson of the panel.

Titled “Appeal for the mobilisation and Implementation of the Recommendations of the Edo State Judicial Panel of inquiry on police Brutality and Other Related Matters #EndSARS,” the letter reads in parts:

“We bring you greetings in solidarity for genuine progress and wish to use this medium to remind you of your sworn commitment to goodwill.

“May we remind Your Excellency that it is apparently a year since the #EndSARS protest took place which led to the setting up of The Judicial Panel of Inquiry across the country to look into all issues that resulted in the subject in reference.

“Sir, it is no longer news that in your usual good spirit, you mobilized one of the most genuine and formidable teams to do justice to the petitions from the victims of police brutality and other related matters as headed by our most respected Hon. Justice Ada EHIGIAMUSOE (Rtd).

“We wish to bring to your notice Sir and for the sake of emphasis that the feedbacks from the street are beginning to show genuine worries over the rationale as to why the reports of the panel are yet to be implemented or attended to, in view of your verbal commitments during the Panel’s inauguration that the implementation will be at least fourteen (14) days after the submission of the report.

“In the light of the above, we wish to appeal that you commence implementation of the report in reference and in other to mitigate public outcry and reinforce the trust in your leadership,” they pleaded.

It would be recalled that Governor Obaseki had, while receiving the report of the panel, assured the government would carefully review the report and ensure that its recommendations were implemented.

The Chairman of the panel, Justice Ehigiamusoe, had while submitting the report, said the panel received a total of 170 petitions and struck out 25 for lack of diligence, while 10 others were dismissed for lacking in merit, with 135 petitions which were considered to be meritorious.

In spite of the huge investment in the water sector by the government and international organisations, water scarcity has grown to become a perennial nightmare for residents of Abeokuta, the Ogun State capital. This report x-rays the lives and experiences of residents in getting clean, potable and affordable water amidst the surge of COVID-19 cases in the state…    Edo EndSARS panel members express worry over non implementation of report

Ohanaeze will not toe line of violence over South-East presidency