Development of my kingdom is non-negotiable ― Alarolu 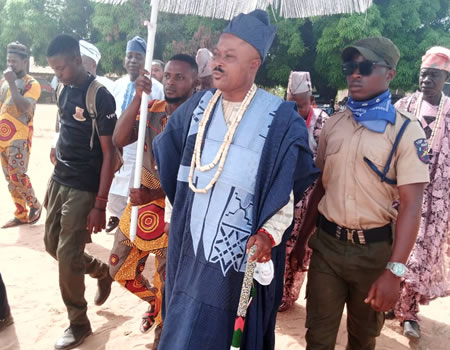 Alarolu of Arolu Kingdom in Surulere Local Government Area of Oyo State, Oba Hezekiah Alao Adedeji 1, has stated his resoluteness to facilitate developments to his domain within the shortest period.

Oba Adedeji, who made the pledge at the official celebration marking his elevation to the rank of second class traditional ruler in Oyo state, was promoted by the previous administration last April. He said that since he assumed the stool of his forefathers four years ago, the kingdom has been witnessing unprecedented developments. He maintained that he has achieved in the areas of federal government offices, electricity, water supply, among others.

The monarch stressed: “Before I became king, there was no electricity supply in Arolu. I make bold to say that my subjects now enjoy electricity. Before I came in, there wasn’t any police station; now, there is one on ground through the support of God and my struggle to build a developed kingdom. We have many borehole water facilities for the welfare of my subjects and the neighbouring villages. These basic amenities, in place, will definitely lure investors to our land and this will be an avenue to create employment opportunities for our youths in the kingdom and in Ogbomoso Zone as a whole.”

ALSO READ: Fulani rapist begged to be killed after his arrest in Ebonyi ― Police

He also hinted that he would ensure that primary health centres and office of the Nigerian Security and Civil Defence Corps (NSCDC) are facilitated to his kingdom with a view to making his subjects healthy and secured. His words: “Before April, the NSCDC command will be achieved in my kingdom. By this, my subjects will be in peace and tranquillity. Efforts are also ongoing to bring primary health care centres to the land of fathers.”

The monarch further used the occasion of the celebration of instrument of office to call on governments at all levels to come to his aid with a view to moving the land to a high pedestal, adding that his good rapports with other monarchs in Ogbomoso and its environs would be of immense benefits to Arolu kingdom development.

He said that the evidence of the good rapports he has with other monarchs was the presence of Oba Al-Moruf Magbagbeola, Olufon of Ifon kingdom in Osun state; Oba Sunday Oladapo, Onpetu of Ijeru Kingdom in Ogbomoso, Oyo state; Oba Adewumi Amodu, Onisapa of Isapa in Ogbomoso; Oba (Professor) John Akintola, Alapa of Okin Apa kingdom; Oba Sayo Oyelowo, Elelega of Elega Kingdom among other notable traditional rulers.

Earlier in his remarks, the Onpetu of Ijeru Kingdom, Oba Sunday Oladapo, enjoined indigenes of Arolu, home and in the Diaspora, to support Oba Adedeji in his resoluteness to develop his kingdom. He lauded Oba Adedeji for his giant strides within the shortest period of his reign. He, however, advised the Alarolu of Arolu kingdom to open his arms of love to his supporters and his opponents, noting that everybody is important in the drive towards community development.

We will ensure development of Sokoto State ― Tambuwal