TAIWO KAFILAT, ND2 Mass Communication student of MAPOLY narrates the ordeal of students, residents, commuters and motorists in plying about 2km road of MAPOLY that is currently in a deplorable state, begging for attention. 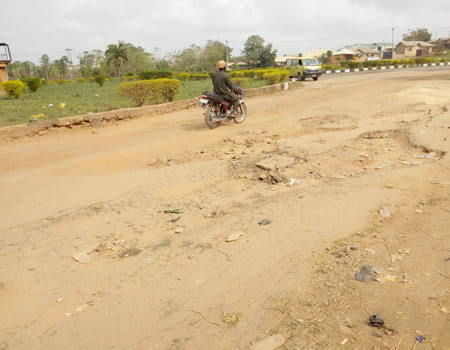 The state of road between Iyana-Oloke and Moshood Abiola Polytechnic environment has been described by many as a death trap, as students, lecturers, commuters plying the road narrated their bitter experiences on the road on daily basis.

A visit to the environment showed that the state government constructed about 2km road from Panseke to Iyana-Oloke, while about 2km which led to the incumbent governor, Senator Ibikunle Amosun Alma Mata (MAPOLY), was abandoned by the construction company.

Findings showed that due to the bad shape of the road, many accidents have occurred which have left several injuries on both the students and residents of the locality.

Investigation also showed that many of the buses used by the shuttle drivers in the school environment have been damaged as a result of the bad road and has put the lives of the students taking the buses at risk.

Meanwhile, the students, drivers and residents described the road as deadly, saying that the lives of motorist and passerby around the environment are now at risk.

While the drivers insisted that the poor state of the road has made them spend a large sum of money in maintaining their vehicles. The motorist claimed the road has exposed them to accident on a daily basis.

Some of them also claimed they spent more than the usual time in passing the road.

The students maintained that the their lives is at risk at the expense of the bad road, urging the government to compete the abandoned part.

The students further expressed their grievances on how terrible the road has always been, right from the start without the government providing a long lasting solution to it.

The students stressed that the difficulties they faced on the road many times disrupt their state of mind for learning.

An HND2 Accountancy student identified as Jubril Odebunmi said: “MAPOLY Road, which is the only road that lead to the institution from various areas of  the City is really in a bad shape.

“The bad condition of the road has been affecting all students by making transportation to the school difficult.

“I have observed that some Shuttle drivers now avoid plying the road as they claim their vehicles do get damaged due to state of the bad”.

Also, another HND1 student, Afolashade said: “Well the road is not up to the school standard, it so disheartening as it has being like that since I got admission into MAPOLY in 2014. It must have been like that for several years. It occurs to me that it has to be renovated.

“Actually, MAPOLY bad road situation affected has been affecting me one way or the other, but the day I could not forget is my first semester HND1, was when my mum called me during a lecture period to report to her location, to make it back to school in time I collected a friend car key, on my way back to school, the car got faulty infront of Gbokoniyi church which I could not make it back to class that day.

“Our lives are at risk with the state of the road and accidents have become daily routines on the road, I just hope the government will  show mercy on us by rehabilitating it for us”.

In addition, Alayinde Esther said the bad road made her miss lectures.

She stated, “The road has made me miss several lectures and even a test that I have to rewrite after several pleas.

Also a nursing mother, Tolani Sodiya narrated her ordeal, saying she almost lost her baby because of the state of the road.

She said: “During my pregnancy, whenever I’m inside bus going to school I hardly sit comfortably, because of my stomach and most time when I get home, I end up having severe pains.”

An ND 2 Mass Communication student of the polytechnic identified as Oluwatobi Odeyinka also described the road as a death trap which has caused a lot of accident for commuters. Odeyinka said, “The road is indeed a death trap. Injuries have been sustained many times by students and to worsen the situation, some of the drivers overload their vehicles, which often lead to an accident.”

Also, a student in the department of Mass Communication Bose Akinkunmi claimed that she often gets terrified on the situation of the road.

Akinkunmi said, “The road that leads to Mapoly from Iyana-Oloke can best be described as a death trap set for the people.

“The road is bad to the extent that, sometimes, I don’t feel like going to school, because I’m always afraid, the bus might summersault on the road.”

In his own reaction: the  MAPOLY Student Union Government President, Comrade Owo-iya Rasaq affirmed the bad state of the road as unbearable for the students.

He said: “You can see that the road is in bad condition, part of our promise before we resumed office was to reduce the stress in transporting our students from their various hostels to campus.

“You will agree with me that, the bad road linking Ojere route from Iyana-Oloke is the main problem of transportation in MAPOLY.

“Recently, all our executives together with some of the taxi drivers took to the road to fill the potholes with concretes and sand, just to reduce the stress of transportation.

“However, we have been crying to the government to help us rehabilitate the road.”

Meanwhile, the Chairman MAPOLY shuttle drivers association, Comrade Adesanya Adeshina insisted that the bad shape of the road has made them spend large sum of money on maintenance of their cars.

Adesanya maintained that the bad shape of the road always make them spend  atleast one hour on a journey that is supposed to be 15 minutes.

He said: “The roads are bad, we expect our governor to repair the road. He knows how much he earns yearly from the institution.

“In MAPOLY 70% of Ogun Citizen ply this route, our shuttles have reduced drastically. Most buses have run away due to the bad road.

It was gathered that Drivers who could not overlook the damages to their vehicles have moved to other areas leaving the students with a shortage of vehicles.

A trader in Mapoly, identified as Kazeem Kayode explained how difficult it has been for him to get to his workplace on a daily basis.

He said, “we all know that the road is bad but I don’t know why  Governor Amosun abandoned the road”.

Meanwhile, when the school management was contacted, both the Public Relations Officer, Yemi Ajibola and Directorate of Students Affair, Townplanner Luke Adelaja  refused to speak on the state of the road.

Also, when the commissioner for Works in Ogun state, Engr. Lekan Adegbite was contacted, he claimedthat  the government will soon complete the road.

Adegbite maintained that the road is one of the ongoing projects in the state, which will be completed soon.

However, it was observed that there is no construction company presently on the road and it does not look like it would be completed soon.

Lekan Shonde to die by hanging for murdering his wife