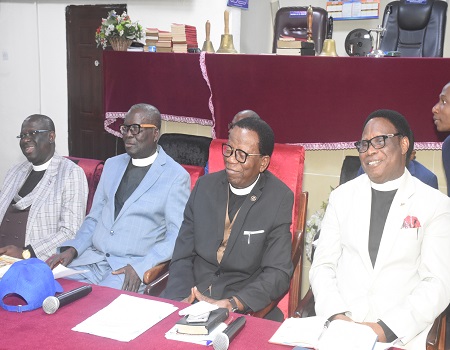 The President of The Apostolic Church Nigeria, Pastor Dr Samson Ekwutosi Igwe has said the church and government at all levels should provide employment opportunities to the youths and curb corruption in the nation.

He said the church and the government should be ready to empower the youths physically, emotionally, socially and spiritually and they are great assets for the church and nation, being the leaders of tomorrow.

He said government at all levels should galvanize economics policies that would cushion the harsh effect of youth unemployment which has opened windows for insecurity, banditry, and insurgency and kidnapping in the country.

Pastor Igwe said the church has been playing the role of fighting against corruption by praying and preaching the gospel of the Lord Jesus Christ to the people in the nation in a bid to cultivate good virtue in people.

He added that the church is providing employment opportunities to the people in the society regardless of their religious belief, through the establishment of schools and other business establishments.

The President said if the church and government at all levels would work hard to address unemployment among the youths; corruption would be abated in the nation.

According to him, providing a solution to the issue of unemployment is a way of solving corruption and other social vices among the youths in the nation.

On the issue of xenophobic attack, Pastor Igwe advised the Federal Government to empower the returnees through their various state governments, so that they would not regret their decision to return home or turn to crime as a means of survival.

He said the president should leverage existing bilateral trade relations with the Government of South Africa to put an end to the inhuman act and ensure proper stay and peaceful co-existence among Nigerians with legitimate employment and immigration permit in South Africa.

At conference, dons identify with Japanese education in Africa