COVID-19: We don’t have data of members who tested positive, PWDs allege 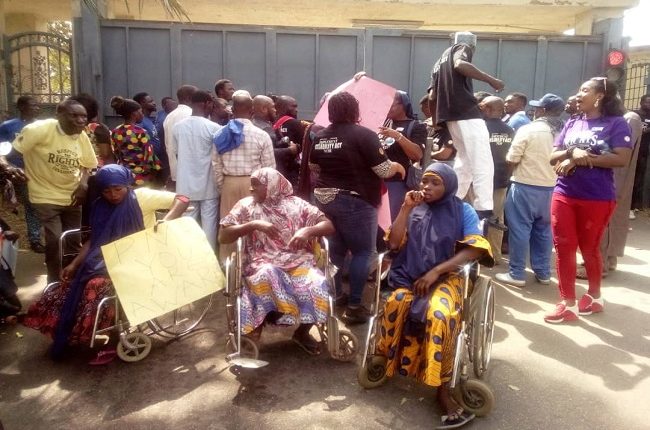 The People With Disabilities(PWDs) in the country have alleged that the Nigeria Centre for Disease Control (NCDC) and the Federal Ministry of Health have not availed to them data of their members that were tested positive following the outbreak of COVID-19 recently.

“We have no data or record of our members that were screened or tested positive.

They, therefore, called on the Federal and states governments to make available data of PWD’s screened and those who are tested positive.

Speaking during a Zoom conference on ‘A Rapid Assessment of the effect of Government Covid-19 Communication and palliative distribution strategies in Kaduna organised by the centre for citizens with disabilities held on Friday, the Executive Director, David Anyaele, noted that even though there was awareness among its members but only a handful of its members were invited to participate as beneficiaries.

He alleged that the strategies for the distribution were very poor, saying there is the need to expand it by supporting the PWD’s and other groups.

Speaking further, Anyaele stated that what was even worrisome is that they have no data on the actual number of their members that are tested positive.

According to him, in Kaduna where they have over 1 million members, nobody can afford to give them this information.

So also at the national level, the NCDC and the Federal Ministry of Health have not availed to them data.

He, therefore, called on Governor Nasir el-Rufai to domesticate the disabilities bill, saying once done it will help in addressing some of the challenges facing PWDs.

‘Many states have signed the bill in less than two or three days, I don’t know why there is a delay in signing the bill.

The assessment was carried out in five states namely Akwa Ibom, Enugu, Lagos, Kaduna and Kano.