COVID-19: Nurses protest as doctors down tools in Ondo 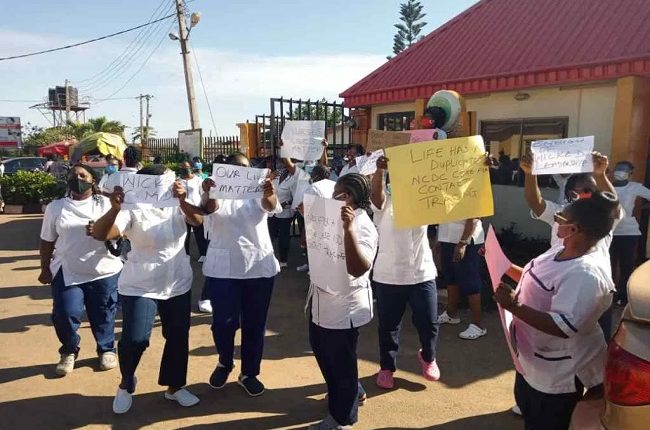 Activities at the Ondo Mother and Child hospital in Akure, the Ondo State capital, were grounded on Tuesday, as nurses working in the facility protested over the insensitivity of the state government to their plight over the spread of COVID -19 disease among them.

This is just as medical doctors in the state, under the auspices of the Residents Doctors Association of Nigeria, commenced an indefinite strike action to press home for the demand for better welfare package.

The protesting nurses, armed with placards of various inscriptions such as “Nurses life matter,” “Don’t you think I am worth being protected?” “Who is next?” “NCDC, urgent attention needed now,” said the state government had failed to members of staff of the facility who contracted coronavirus.

The nurses who described the spike in the cases of COVID-19 among health workers as worrisome said the trend has been increasing on a daily basis, without efforts from the government to embark on contact tracing of infected persons.

It would be recalled that over 10 nurses, five doctors and other health workers were reported to have contracted the deadly COVID-19 in the state in the last week.

Speaking to Tribune Online, the state chairman of the National Association of Nigerian Nurses and Midwives (NANNM), Comrade Kehinde Nomiye, said nurses and patients at the hospital are now at risk of the deadly disease.

Nomiye who threatened that members of the association will down tools if the situation is not addressed demanded for better condition for the nurses and other health workers. 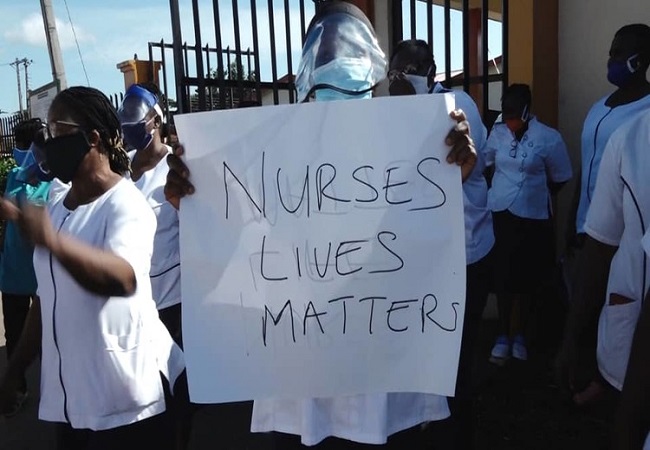 He said: “We are protesting because our welfare as nurses in this facility are not been taken care of, particularly when there was a COVID-19 confirmed case since Friday, the NCDC and the state government have not deemed it fit to visit the hospital to start the contact tracing of the case.

“They expect us to be calm and to continue to work without trying to trace those who had contact with the patient in the facility.

“This is not the issue of money but the issue of management structure to assuage the nurses and to give them the best information so that they can carry out their services.

“If they are not forthcoming after this protest, we will give them 42 hours and if nothing is done we will embark on strike.

“Other hospitals in Ondo State are on alert now because we have COVID-19 monitoring group in all the hospitals.

“We want NCDC, government and all the necessary machinery to come here and do the needful.”

Meanwhile, the doctors threatened to commence industrial action on Wednesday, saying despite their exposure to COVID-19, the state government has failed to attend to their welfare.

The medical doctors who also frowned at the shortage of protective equipment noted that the development had made it easy for some of the health workers to contract COVID-19.

Speaking with newsmen, the state secretary of the NAGGMDP, Dr Tunde Olasakinju, said state government never acceded to the ultimatum issued by the association on the strike action, saying no fewer than 15 letters had been forwarded to the state government.

Olasakinju said: “The government has deliberately failed to conclude negotiations on the erstwhile suspended minimum wage and consequential adjustments already enjoyed by the non-medical staff since January 2020.

“To our dismay and utter disappointment, as high as two and a half percent of our members’ meagre consolidated basic salaries was deducted in the month of May 2020.

“The special COVID-19 hazard and risk allowance pronounced and approved for our members to commence from May 2020, which was to serve as a morale booster to our members working assiduously to fight against the spread of the deadly virus, was not paid.

“Our highly spirited and delightfully dedicated members have not been captured in the implementation of the previously negotiated and Federal Government – approved skipping for doctors. The one-month unpaid arrears of January 2017 still remains unpaid to members.”

He noted that six of their members had been infected with COVID-19 and are on admission at the Infectious Disease Hospital while several others have been isolated and quarantined due to inadequate supply of personal protective equipment.

“After extensive deliberations, the congress unanimously resolved that our members will commence a total withdrawal of services effective from Wednesday, June 24, 2020,” he announced.

He, however, said that the members of the association at the IDH where COVID 19 patients are being treated, would still be at work for one week and if the situation persisted, they would withdraw their service and join the strike.

Equities market further dips by 0.02 per cent on profit-taking

Court remands husband, one other, over alleged murder of mother, daughter