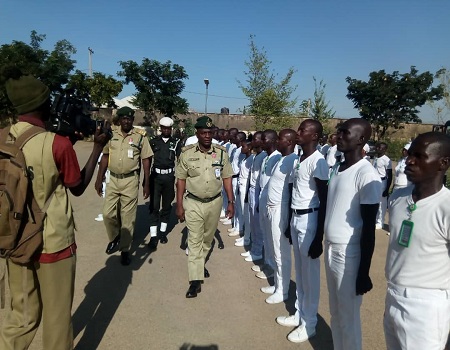 Newly recruited officers and men of the Nigerian Correctional Service, Bauchi State Command have been urged to uphold discipline and be professional in discharging their duties.

The call was made by the Controller of Corrections, Bauchi State Command, Suleiman T. Suleiman, at the passing out parade of the new recruits organised to mark the end of their four weeks induction course held at the State Headquarters Office, Federal Secretariat Complex, Bauchi.

Controller Suleiman Suleiman commended the new recruits for their resilience and commitment to work and urged them to put into use the knowledge acquired during the induction training.

He, however, cautioned them to guard against trafficking and other illicit dealings with inmates while at their respective places of work just as he emphasised that trafficking is a serious crime against discipline in the Service and can lead to dismissal or imprisonment.

The Controller of Corrections commended the Coordinator of the induction course, ACC Nasiru Isa, parade instructors and other directing staff for teaching the recruits the basic rudiments of the Service within a short period of time.

The new inductees had earlier thrilled the Controller and other spectators with a march past in slow and quick terms, parade in review order and three hearty cheers to the Controller of Corrections as contained in a statement By Dsc Adam Abubakar Jibrin, Command Public Relations Officer of Nigerian Correctional Service Bauchi State.

FACT CHECK: Is ICT the next oil money source?

For Makanjuola, Caverton boss, it is double honour