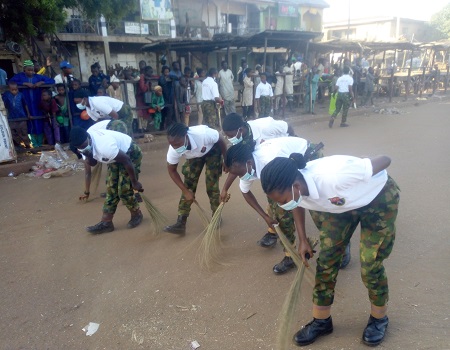 The Nigerian Army Women’s Corp (NAWC), on Thursday embarked on road sanitation, medical outreach as well as traffic control across Sokoto town metropolis to round-up activities of the force for the year.

He called on young Nigerian women especially in Sokoto to aspire to join the Army so as to contribute their quota to the overall security architecture of the country at large.

He described the Nigerian Army Women Corps activities as a win-win for women and to tell the world that narrative is changing, saying women are ready to play their roles if given their rightful place in the society.

“This is why NAWC is in Sokoto state to play those roles which we started with road sanitations, Medical outreach and Traffic control within the state.

Earlier, the team had embarked on sanitations across some major road in the state capital, beginning from Haiia Halima to the Main market.

One of the beneficiaries of the medical outreach, Umar Abdullahi, who spoke with our correspondent commended the Nigerian Army for the gesture which he described as a rare gesture.

According to him, “I was just passing through and saw people gathered and was told its a medical checkup by the Army.

“I immediately joined them and behold my brother, after the necessary check-up by the Doctors and Nurses here, I was also given drugs free of charge.

Also speaking, Mallam Kabiru, another beneficiary of the medical outreach who described the presence of the team as Godsent to him,

He said, “I couldn’t sleep overnight due to the drugs prescribed for me two days ago in which I have not been able to raise money to buy

“When I heard of these, I quickly dressed up and rushed down. Can you that same drug written for me in the hospital were also prescribed for me here and given to me without paying a dime.

“I am very happy with this gesture especially coming from the Nigerian Army that everyone sees as tough and that can’t be approached anyhow.

“I thank the authority for the Nigerian Army, especially these women here for this kind gesture. May God continue to bless them” he added.

Meanwhile, members of NAWC also embarked on road traffic control along the Gidan Mahadan area of Sokoto to ease traffic congestion in the area.

FACT CHECK: Is ICT the next oil money source?