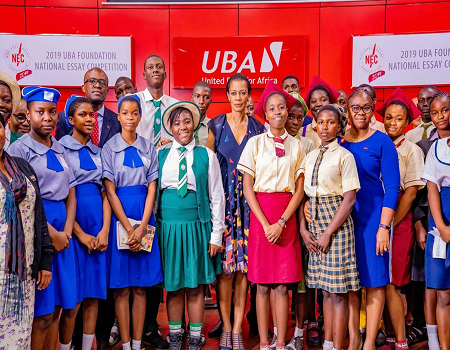 The Corporate Social Responsibility arm of the United Bank for Africa (UBA) Plc, has commenced the 2019 edition of its annual National Essay Competition in Nigeria with a call for entries.

At the media launch which took place at UBA headquarters in Lagos on Tuesday, the call for entries was announced.

Speaking at the event, the Chief Executive Officer, UBA Foundation, Mrs. Bola Atta, said the essay competition, which is in its ninth edition, will provide an opportunity for students in secondary schools across the country to put in their entries and to win prizes in the form of educational grants to study in any university of their choice on the African continent.

Beginning from last year, the prize money increased significantly as the UBA Foundation emphasises that education remains one of the foundation’s key initiatives.

Speaking to the students and participants at the event, Bola Atta said, “To us at the Foundation, this is our drive to improve the quality of education across the continent. It is also our way of giving back to society.  The competition is a key aspect of our investment drive in human capital, as we seek to improve the knowledge base, allow students to express themselves and write creatively. We will continue to sustain the initiative because education is very important to UBA and we are more than committed to providing the necessary support for students in Nigeria and across the African continent,” she noted.

“We are driven by the mantra to do well and do good and we will not relent in our efforts to touch lives through our various projects, and initiatives,” Bola Atta told the excited students.

Explaining the modalities for the competition, she stated that entries received from students for the competition will be reviewed by a distinguished panel of judges made up of professors from reputable Nigerian Universities, who will then shortlist 12 best essays for further assessment.

We will continue to care for you, Lagos govt tells students with special needs