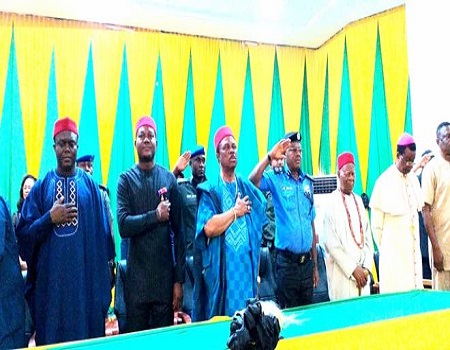 Anambra State governor, Chief Willie Obiano, has directed the one hundred and seventy-nine Communities in the State to choose fifty Male and female indigenes from among themselves for special police training.

The Governor who gave the directive yesterday, at the Professor Dora Akunyili Women’s Development Center, Awka, during a meeting with members of critical sectors in the State, said that the move is in continuation of the Community Policing initiative of the Nigeria Police Force.

Governor Obiano who hinted that every crime is local, said that every community own their security, pointed out that the Traditional rulers, Presidents General, Youth Leaders, women leaders, vigilante leaders, Divisional Police Officers and other critical stakeholders are part of the selection team, adding that they should meet twice a month to discuss security as it affects their domains.

The Governor explained that each community has one month to forward the names of the individuals who will be trained and appointed Special Constables with uniforms, but made it clear that the individuals must be people of impeccable character, calling on the stakeholders to join hands and combat open defecation, blockage of drainages, street trading, Lassa fever, coronavirus, tax invasion, warning that enforcement team will begin to go round the markets to monitor compliance.

The Special Adviser to the governor on Chieftaincy, Town Union and Community Affairs, Barrister Vera Okonkwo, while appreciating the Governor’s efforts in fighting crimes and other criminality in the state noted that the community policing will go a long way to bringing the police and citizens together to prevent crimes and solve neighbourhood problems.

She enjoined residents to embrace and give their support to the innovation.

On his part, the member representing Anambra West constituency in the house of Assembly, Honourable Sir Patrick Udoba hinted that with Community policing the emphasis is on stopping crime before it happens saying that community policing also gives citizens more control over the quality life in their communities.

In their separate speeches, the traditional rulers of Okpuno Igwe Sunday Okafor and his Olumbanasaa counterpart,Igwe Pius Omachonu further explained that the central goal of community policing is for the police to build relationships with local agencies and members of the public in creating partnership and strategies in crime prevention.

They commended Governor Willie Obiano for embracing the Noble idea assuring that the state Traditional Rulers are solidly behind him and will always give their fatherly advice when necessary.