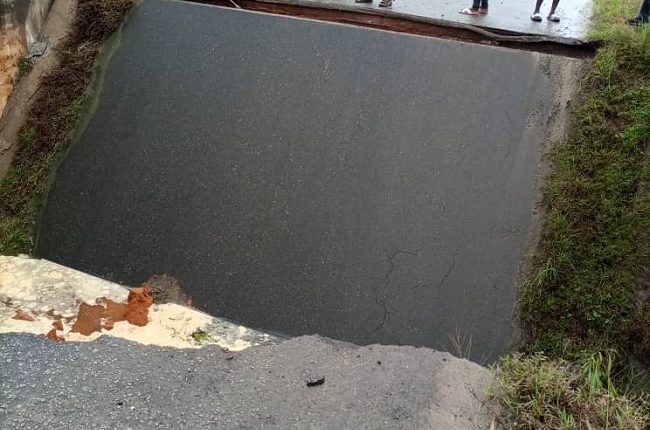 A motorcycle rider has been hospitalised, following the sudden collapse of Eru Bridge, along Uzere/Asaba Ase Expressway in Isoko South Council Area of Delta State.

Following the collapse of the 29-year-old bridge, no fewer than five communities in the state have been cut off.

The motorcycle rider, who is a victim of the incident, is currently at an undisclosed hospital with doctors battling for his life.

The bridge, which collapsed at around 8:00 a.m on Monday, is said to be the major access route to some communities located at the bank of the Niger River.

The area is among the highly flood-prone zones in the state just as the bridge is a major plied by motorists and commuters some of whom are farmers and traders.

Speaking to journalists, President-General of Uzere community, Mr Brooklyn Essi described the incident as unfortunate, especially with the floods fast setting in.

“It is the only road that leads to Uzere presently, from which you can also access Asaba-Ase, which is at the bank of the River Niger, Nsibisi area and all that.

“It is so unfortunate that it happened this period because the floods are fast setting in. To access these towns is now a big problem except maybe by canoes.

“Right now, a proper work will have to be done. It is a federal road, so we have to notify the Federal Ministry of Works so they can send their people down to see the extent of failure of the bridge and a portion of the road. And if in a few days nothing is done, part of the road will be washed off from what we have seen.

“We actually need the presence of the Federal Government seriously now to come help the Uzere people, Ekregbisi, Abare, Asaba-Ase. In fact, this is the only link to the riverine areas. All of us have been cut off as I am talking now” the community PG said.

He added that there was no sign to indicate the imminent collapse of the 29-year old bridge, that efforts were on to draw the attention of the state Ministry of Works to the development.