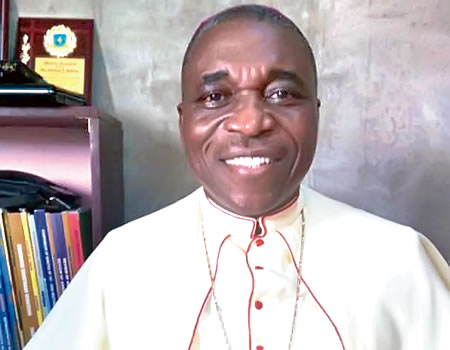 What role can the church perform in the quest to build our dream country?

It is true that the world is looking up to the church to take a step as well as affect the society positively because people wanted a new Nigeria. In the past, when there were problems in the world, the church would come into action and the church became an agent of change in the 18th and 19th century.  The church has always been playing active roles. The quest for a new Nigeria will also begin with the church in our time. Our role is to continue to be the voice of God in order to continue to speak the mind of God and to promote the values that will give us a Nigeria of our dream, the values that will make people know their right from their wrong. We used to do this through moral instructions in our schools back then and I enjoyed that. On Mondays, there were moral instructions from Christian side and Fridays were for Islamic instructions. From there, pupils, students knew the good and the bad. But these days, government has said that there should not be moral instructions in our schools. And you ask where are the children learning from. They are not learning moral instructions from schools and parents are too busy to teach them from home. So, our children are learning from the social media and it is a known fact that 95 per cent of what they are exposed to on the internet are full of deceit and evil. Unfortunately, that is changing their belief system and lifestyle.

The church is no longer seen as the bastion of high moral ground, probity and other values that exalt a nation. What went wrong?

It all started during the military era. If we are blaming the present leaders, we should not forget that majority of them actually dined and wined with the military. The democratic government started with former President Olusegun Obasanjo. He was a military officer down to Yar’Adua, and the current president. It’s a case of recycling. We all know what happened during military era. They bastardised our educational system. That was when mission schools were taken over and it has a serious implication when you do that to a nation. How many schools, hospitals did the government build? The ones built either by Christians or Muslims have been taken over and up till today, nothing much has been done in our educational institutions. Government ought to commit about 26 per cent of the total budget on education, but only negligible percentage is being committed. This is why our education system is in a sorry state. Graduates are churned out and many of our graduates are a disgrace when compared with their counterparts abroad. Most of the teachers and lecturers are products of corruption. Many of them did not have sound education. Go to our universities, many academic institutions do not have funds for research. Thus, the situation has affected many lives in this nation. Our leaders must fix our education system now in order to achieve a better Nigeria. This will affect a lot of things positively in the country.

There was a time when clerics were put in highest esteem because they could not be compromised and intimidated. Why is the situation different now?

It is really unfortunate that in Nigeria today, we now hear of some clerics who have become a disgrace to God. I want to say that the church must not keep quiet. If there are such clerics, the church should condemn in clear terms such behaviours. Immoral acts should not be condoned. The other thing is that most of these clerics are not genuinely called. Many of them are there because of poverty; they want to make money. If you have 20 churches, I tell you, 10 or more have become business centres. We missed it as a church when many of the clerics preach materialism instead of repentance and salvation. Wealth is supposed to come naturally to a child of God when we are honest and serve God diligently. We are not called to preach materialism. The Bible says ‘seek ye first the kingdom of God and all other things shall be added on to you.’ But what do we see now? People devise various means of enriching themselves. We are beginning to hear that some clerics are aiding corruption. Some of them have become willing tools as politicians use them to siphon public money, knowing that the anti-graft agencies may not look in their direction because they are men of God. We hear some of them are involved in money laundering. If that’s true, the anti-graft agencies should investigate it and bring such clerics to book. We have to sanitise the system. I will not embrace any member of my church, a teacher, civil servant, who brings tithes in millions. The church must be careful; otherwise it may lose its integrity and relevance. We must condemn evil, social vices in the society as well as be ready to preach righteousness.

The church, business and politics, is there any link and how?

I will say that the nexus in the three is that they are all in business. The church is doing a business of soul winning; politics is all about winning it all, ascendancy, getting to power. There is a lot of difference among them. The church must not be seen to be involved in politicking; rather it should ensure that credible members participate in politics. We should not be an agent of confusion. We should not be playing partisan politics. You could know where a pastor belongs whenever he speaks. That is not what we are called to do. We are called to sanitise the system. The church should concentrate on its core mandate of saving soul, while creating opportunities for others. The church should think in terms of welfare, education, health care and security of members.

The country still gropes in the dark in the midst of human and natural abundant resources? Isn’t this a time bomb?

Nigerian leaders are selfish, self-centred and they lack vision. Nigerian leaders lack meaningful programmes, an agenda that can transform the nation. Interestingly, they go on vacation abroad. They see development in those places, yet they are not bothered. Are they saying there is no fund for transformation? I am bold to say that the problem of this nation is not poverty. If our leaders will stop stealing public funds, Nigeria will become an enviable country. That is why I commend President Muhammadu Buhari and I think we should support him rather than criticise and give him names. That is why I recommended at our last synod that anyone found guilty of corruption should not be allowed to contest political office again in this country. I also supported the local government autonomy; this would give room for accountability.  We must stop the idea of celebrating thieves and corrupt politicians in this nation. The church should stop seeking assistance from them. Don’t ask corrupt politicians for donations in the church. Whoever becomes our leader at any level of government should be able to be held accountable for whatever money he collects.

Story Behind the hymn Alleluia! Sing to Jesus

Tattoos! What the Bible say about body?