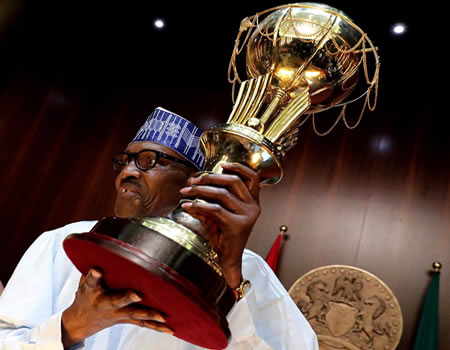 Speaking shortly after the players and officials presented the Afro Basketball trophy they won in Mali to him at presidential villa, Abuja, he also announced that the officials would receive N500,000 each.
The team beat Senegal in the finals to emerged champions of Africa for the third time.
The event preceded the meeting of the the Federal Executive Council (FEC) attended by the president for the first time in several months following his medical vacation in the United Kingdom.
He was heralded into the hall by clapping from members of the cabinet before Minister of Communications, Adebayo Shittu and his Labour and Productivity counterpart, Chris Ngige, offered prayers thanking God for the president’s return.
Buhari had cancelled last week’s FEC meeting but received the report of the presidential investigative panel on alleged corruption cases against for the suspended secretary to the Government of the Federation (SGF) Babachir David Lawal and the Director General of the National Intelligence Agency (NIA) Ayodele Oke.