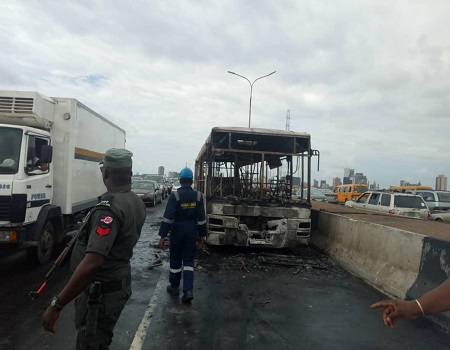 A Brt Bus caught fire on third mainland bridge at about 9:30 a.m, leaving no record of death or casualty due to an electrical fault.

The Bus was commuting passengers at its stop in Ikorodu to TBS when the incident occurred.

The Unfortunate scene left passengers, whose majority were workers of different companies in Lagos Island stranded for a while before getting an alternative to resume their work duties.

Speaking to The Public Relations Officer, LASEMA, Mr Kehinde Adebayo said that Blue BRT Bus with an unknown registration number had an electrical fault which resulted in it getting completely burnt.

He, however, stated that there was no casualty, as the fire was completely put out by men of Lagos State Fire service from Alausa station.

Kehinde said that Traffic controls ongoing while awaiting the arrival of Heavy duty equipment Forklift and low bed for the evacuation of the burnt bus off the road.