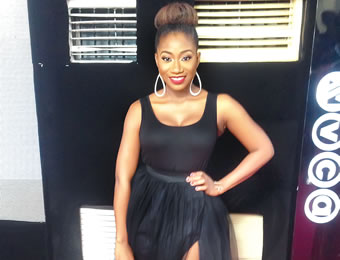 Ade Laoye  is an actress, who is currently on the MNET-sponsored Africa Magic popular TV series, Hush. Her character, Oye, an assistant to a governorship aspirant, has continued to impress her audience and  growing fan base. However, Ade, who is a Pennsylvania State University-groomed actress, comes from a music background. The former Ebony Life TV presenter, who told NEWTON-RAY UKWUOMA in this interview that she chose acting over music because of the fascination also says, among other things that she admires authenticity in men.

How long have you been acting?

Did you start acting in Nigeria or in the US?

Professionally, I started in the USA. But I have always had a flair for drama before I went to the US. I come from a very artistic family: the Laoye family. My grand uncle, Oba John Adetoyese Laoye, the Timi Agbale of Ede, was popularly known as ‘The Drummer King’. Art is in my blood. Nikki Laoye, the gospel singer, is my cousin. We all sing. We all love music.

But in choosing a career path, why did you choose acting instead of singing?

Well, I have always loved to sing. I sing, in fact. But being able to embody different personalities has always fascinated me. I chose to study Theatre Arts out of curiosity. Growing in Nigeria, my parents wanted me to study medicine. It was either Medicine or Engineering, you know, the usual. But when it was time to go to the university, after looking at the courses available, the fascination led me to Theatre Arts. It was something, I felt, I could do for the rest of my life.

After your graduation, how long did you stay before coming back?

After graduation, I stayed in the US for an additional six years. I was living and working professionally in Philadelphia doing stage plays and teaching acting to kids in schools and at summer camps. I also spent some time working in New York where I performed with a stage production that toured across a few states.

You appear in more TV series than movies.

I have a lot of experience in stage performance, only just recently did I start doing TV. I haven’t done as much film as I have done TV. However, people recognise me in stage performances such as “Saro, the musical”. I played the character of Jane. I was also in “Wakaa’, the musical” as Ngozi. Both stage plays were produced by Bolanle Austen-Peters. As for movies, I had a small role in Emem Isong’s “Knocking on Heaven’s Door” and I played a teacher; Miss Uche, in Seyi Babatope’s LunchTime Heroes. Two movies. But I have done a number of TV series.  I was in Dowry and “HM Travels and Tours” both series aired on EbonyLife TV. I also did another series called Studio that one was aired on AIT and I am currently working on Hush, airing on Africa Magic.

Having been adequately immersed in two cultures and industries, what would you say are the noticeable distinctions?

In my experience, I think a certain level of seriousness of the craft is needed here. People invest a lot of time, resources and money in developing themselves, whether it is taking classes or attending workshops in the US. I find that there aren’t as many of such opportunities here. Sometimes I feel rusty and want to take an acting class or a voice lesson. We don’t have a lot of these specialised training environments in Nigeria. We have some, but they are not enough. It’s easy to take a quick audition class, character development class or voice lesson in New York. There are so many resources, sometimes too many, it can be hard to choose. I find that it is hard to find a training centre here. I also think that a lot of people kind of wake up to want to act without realising how much work goes into the craft. I think I miss being in an environment where everyone is itching to learn, to be better, to challenge themselves. It is not always about being famous or being recognised. Feeling fulfilled as an artiste is important to me. It is hard to get that feeling herer.

Tell us about your role as Oye in ‘Hush’

Yes. I play the character of Oye. Oye is a campaign manager of a woman running for governor. Oye is sort of a fixer. Her job is to get things done – you know, find solutions. She does it quite well and sometimes a little too well, gets herself into trouble sometimes. She is very sassy and she gets to play with the big boys. She lives with her sister. This is the first time I am in a long running series.

How long has Hush been on air?‎

Hush has been on for about four months, but I will be running for a year.

What has been the feedback from fans?

So far, the feedback has been amazing. Whenever the show is on air, Twitter goes crazy. And we try to engage fans on social media whenever it’s airing. My character seems to be an audience favourite.

But it seems a lot of people misjudge your character, do you share that view?

A lot of people still haven’t gotten a firm grip of the personal motivation and struggles of my character. I don’t think they know who she really is yet.

Do you want to enlighten us here?

No! You’ve got to watch it through. In the next few months, people would get to know who she is and not get to define her by what she does.

What is Oye’s personal motivation?

I think she has defined herself a lot by what she does. I think her goal is to be number one. She sees herself as a leader. I think all the decisions that she makes were to put herself in a position of power. She is someone who is attracted to power. I think she is a fighter. She can do anything to get to the top.

Is she planning any strategic move that you want to share?

[Laughs] I can’t tell you that! Just keep watching.

What are the challenges you have encountered playing Oye?

First, it is a long series. I don’t know how the story is going to end. We get our scripts in chunks. I don’t know what will happen to my character along the way. Your character evolves with the story.  I sort of try to keep in mind what my driving force is, what my character wants, while also anticipating changes. Secondly, we shoot out of sequence. Today’s scene and next week’s can be shot today. Sometimes the timeline might get mixed up, but you have to be careful to track your emotional states so that you don’t laugh where you are supposed to cry. Switching emotions is another challenge. Not carrying the baggage of an emotional scene into another is one heck of a job. Again, never losing sight of what your character was is important. Every character wants something. Making sure that your objective this minute contributes to the objective of the series from point A to B is important.

We seem to know who Oye is, who is Ade Laoye?

My full name is Adejoke Laoye. Family and friends call me Ade or Joke. Professionally I am known as Ade Laoye. I am from Osun State, but lived in Ibadan, Oyo State. I come from a closely knit family. I come from a family of five. We are five girls. I am the fourth of five children. My sisters are my best friends.We share everything. I like to think I am a loyal friend. I love my friends fiercely. I am someone who feels extremely grateful and blessed  to live the kind of life that I live. I haven’t done anything to deserve it. I am grateful to family and to God. I feel lucky in a lot of ways. I don’t take anything for granted. I love ice cream. It makes me happy. I love food. I don’t like to cook. Note, I didn’t say I can’t cook. I think I am curious and adventurous. I love learning things. I love travelling. I love to learn about cultures and fascinating things about the world.

How do you assess men who come around you?

Ultimately, I am attracted to authenticity. I believe who you are is more interesting than who you are trying to be. I hear a lot of people say a guy must be rich and handsome and God-fearing. I think who a person is, is more valuable than money. I am also attracted to people who are courageous. If you want to talk to me, do it boldly. What is the worst that could happen? The people who get my attention are those who are bold about it. So if you are brave and courageous you will get my attention. Otherwise, be you. If we click we click. If we don’t, we don’t. A foundation of friendship is the basis for any relationship.

Are you in a relationship right now?

Because we are in Nigeria, one would ask, do you intend to continue to dislike cooking?

Well, we all do things we don’t like. I am not married at the moment. I don’t have children. And having to cook for people is not my responsibility. I know how to get myself fed. I will cross that bridge when I get there.

There are different kinds of food in Nigeria, which ones can you make?

Beside making rice and stew, my Indomie is amazing. Beans and plantain come next. I can make ewedu. I lived in Ibadan. Ewedu is kind of easy. But I have not tried making egusi. I have a friend who will be teaching me during the weekend.

So we shouldn’t ask about Edikangikong soup?

No. Please, don’t. Learning how to make egusi is my next project.

Can I circumcise my daughter?

In the UK, women seek divorce through Sharia councils

Whatever is not challenging is not worth trying —Singer, El-Ricky

It took 12 years to have my big break —Jide Kene

I’m not a herbalist, I am a Christian and I go to church —Adewale Alebiosu