As Imo politics takes another dimension

Politics
By JOHNKENNEDY UZOMA On Jan 5, 2022 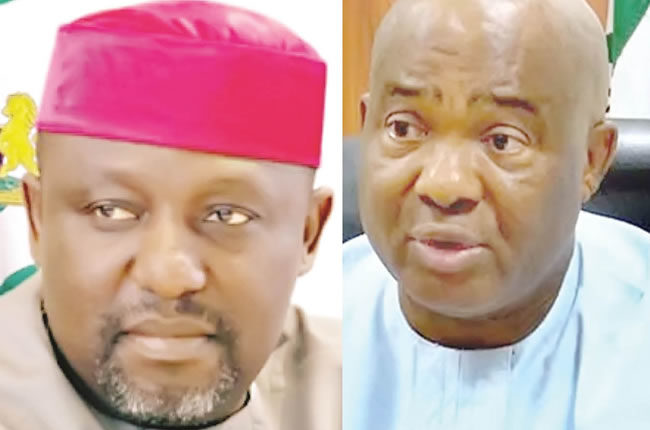 It was not the first time it would happen. In fact, the desecration of the Cassock and the Holy Temple of God Imo State is commonplace.  In this piece, JOHNKENNEDY UZOMA takes a look at the December 26, 2021 invasion of an Imo Anglican Church by some gun-toting policemen, who arrested Ugwumba Uche Nwosu, son in-law to former Governor Rochas Okorocha right in front of the pulpit.

Imo State and the country, at large, was on December 26, 2021 awash with the news of the ‘kidnap’ of the governorship candidate of the Action Alliance (AA) in the 2019 election in Imo State, Ugwumba Uche Nwosu, at St. Peter’s Anglican Church, Ezeama Obaire, Diocese of Orlu. The initial story which filtered later turned out to be an arrest carried out by policemen. However, state Commissioner of Police, Rabiu Hussaini, through the spokesman of the command, Chief Superintendent of Police (CSP) Michael Abatham, denied the rumour of kidnap but accepted that it was an arrest carried out by police personnel.

The incident, which attracted outage across the globe, took  place during an outing church service marking the burial of the late Ezinne  Jimaimah Nwosu, mother of Uche Nwosu.  While the entire family were already in the church, including  Nneoma Nkechu Okorocha, wife of Senator Okorocha and mother in-law to Uche Nwosu, the clergy and other worshipers, the armed men in a large number, stormed the church and bundled the former deputy Chief of Staff, Government House, Owerri and former commissioner for lands, into their vehicles and zoomed off to an unknown destination.

The invasion brought the church service to an abrupt end, given the bullying, panic and assault allegedly visited on the priests, Uche Nwosu, his mother in-law and other worshipers. It will be recalled that Uche Nwosu served the former governor Rochas Okorocha administration before contesting for governorship of the state under the platform of AA. Interestingly, the invasion of the church by security personnel, leading to the arrest of Nwosu, is the second time such will be recorded in the state.

A lot of people in the society did question why the police will storm the church in such commando style, to make an arrest. Among those who have raised eyebrows at the invasion are the Archbishop of the Anglican Province of Owerri, Most Reverend Dr. David Onuoha, including the headship of the Catholic Church, which strongly condemned the action of the uniformed men, which they noted, amounted to desecration of the universal church.

Observers have greeted argument of government officials that the action was strictly the police carrying out its duty with scepticism with accusing fingers being pointed at Governor Hope Uzodimma as being behind the arrest of Uche Nwosu.

Leading the accusations was the immediate past governor of Imo State and senator representing Orlu Senatorial District, Okorocha, who held that his successor and current governor, Hope Uzodimma is the brain behind the arrest. Okorocha alleged that the policemen that carried out the arrest of his son-in-law, pushed his wife, (Okorocha›s) Nkechi, down and tore the clothes of his first daughter, Uloma, who is married to Nwosu. Okorocha further alleged that Governor Uzodimma, deceived the Inspector General of Police, Usman Baba, into desecrating the church by arresting Nwosu, just as he alleged that the state government wanted to frame Nwosu because of the perceived government’s “non-performance.”  Okorocha said that Uzodinma had not hidden his dislike for him and the members of his household and called on the governor to name the sponsors of the insecurity in the state.

However, Uzodimma has unequivocally declared that the government has no hand in the arrest of Nwosu. Speaking through the state Commissioner for Information and Strategy,. Mbadiwe Declan Emelumba, the governor accused Okorocha of trying to whip up sentiments, advising him to await the law to take its course before reacting. He cautioned that any attempt by Okorocha to use the arrest of Uche to cause panic would be evidence of guilt. Uzodimma insisted that Okorocha contradicted himself when he alleged that the commissioner of police in the state told him that the order came from the Inspector General of Police in one instance and claimed that the arrest was ordered by the governor in another instance.

The Boxing Day episode, according to most residents in the state, serves as a reminder of a similar incident during the tenure of former Governor Ikedi Ohakim in the state, when he was reported to have slapped a Catholic Priest. Catholics and non-Catholics alike had risen to condemn the development, then. Then, there was no remorse from official quarters with some commissioners and other aides were accused of exploiting the incident to cause more havoc for the governor and his administration.

The fallouts of the incident began to manifest during the 2011 governorship election, when Ohakim wanted a second term in office. The bid was not successful, as he lost to Okorocha at the poll. According to some observers, the Catholic Church followed the matter from the time it happened and it culminated in the failed reelection bid by Ohakim. The situation changed the entire political landscape in the state then, as other politicians capitalised on the incident against the former governor at the poll. Pointing to the Ohakim scenario and its consequences, the Boxing Day scenario has thrown up a number of posers among political observers in Imo. Will the Boxing Day episode be a factor in coming elections in the state?

For both Governor Uzodimma and Senator Okorocha, the December 26, 2021 incident, may have deepened the gulf between them and aggravated tension and distrust among their supporters and sympathisers, as well as further polarised the state that has been on the edge for a while now. According to some observers, though the government has apologised to the Anglican Church in the state over the incident, it is certain that the issue would remain in the minds of both gladiators and be a point of reference in the political landscape of the state.

They opined that the camp of Okorocha could use the incident for political gains by putting that of Governor Uzodimma on the defensive. Since Okorocha left office in 2019, after serving out his second term, a frosty relationship has subsisted despite the duo belonging to the same APC political family. Nwosu did regain freedom after spending 24 hours in the hands of the security personnel. However, the people of the state are anticipatory of how the scenario plays out in the buildup to next elections in the state.

Why I want to be APC national chairman —Mustapha