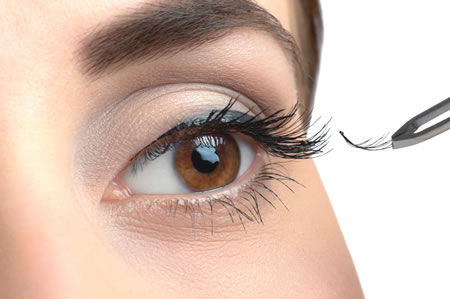 It has been confirmed that behind the apparent beauty of false eyelashes lie some hidden dangers.  Some of these include allergy to the material of the fake eyelashes, exposure to dirt and bacteria which the natural eyelashes usually guard against but the artificial ones cannot. Moreover, the reusable lashes after a point can trap bacteria and dirt as these products have chemicals in them, which then can lead to infections.  In addition, after putting a lot of glue and makeup on your eyes, it might cause eye problems for which you will need medical help. They might also cause irritation, which can lead to problems known as madarosis (the loss of lashes).  Another problem is the loss of the original eyelashes. In order to put on these eyelashes, you have to use glue. When you glue the fake eyelashes onto the eyelid, you might glue the real lashes too. And when you remove the fake eyelashes, you might tear off your real eyelashes. You can end up with bald eyes.  Since our natural eyelashes are feather-like; the weight of these fakes (which are comparatively heavier) can actually harm your original lashes. As such, those once natural and healthy looking lashes might not stay the same after the constant use of fake eyelashes.