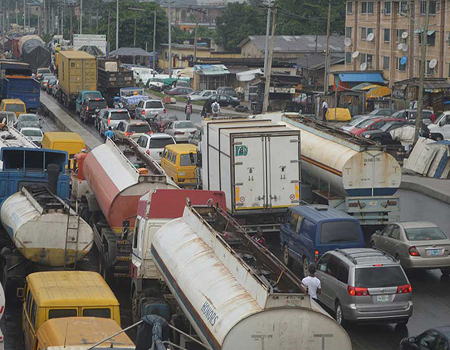 Stakeholders in the real estate industry of Apapa have suggested a multi-pronged approach to solving the gridlock menace in the area.

Speaking with Tribune Online, the managing director of Wemabod Estates Ltd, Yemi Ejidiran, said that the clampdown by the Federal Government on trailers that have clogged major roads in the Apapa axis was not a silver bullet.

According to him, as long as the Apapa port remains the port the rest of the country depends on for imports, the congestion would remain.

Noting that Wembod Estates has recorded a major reduction in its occupancy rates for properties in Apapa due to the gridlock quagmire, the managing director said that what should be done is the opening up the eastern ports so that traffic can be diverted away from the overburdened Apapa seaport.

“If the Federal Government does this, it will help the situation,” he said.

In his reaction, Chief Tokunbo Omisore, CEO of Top Services Ltd, an indigenous mall development firm, said the fact that the FG interventions on the Apapa gridlock have not yielded the desired solution indicates the need for a different approach.

He told Tribune Online that other means of transportation could be employed in discharging cargo from the ports, mentioning the use of barges in particular.

The developer of the Apapa mall which houses Shoprite also stated that information technology (IT) solutions could provide useful solutions.

According to him, “How does the government want to solve this? We know that barges can be used. We know that IT can be employed to control and regulate (traffic). One thing that has become a big problem in Lagos, and it is not peculiar to Apapa, is the lack of traffic management.”

He added that “traffic management without an IT system to back it up is like operating in the Stone Age.”

The past president, African Union of Architects (AUA), said that Apapa as a whole needed improved road network for property developments in the area to be successful.