Latest NewsTop News
By Olayinka Olukoya - Abeokuta On May 25, 2019 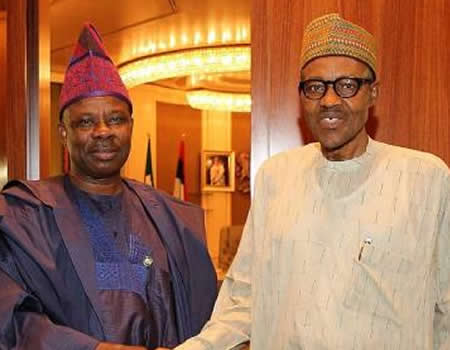 Share
President Muhammadu Buhari has commended the outgoing governor of Ogun State, Senator Ibikunle Amosun, for constructing projects that are enduring and of the first-class status.
Buhari stated this in his remarks after he had commissioned and inspected some “legacy projects”, during his one-day working visit to the State.
The projects commissioned were the Ogun State Digital Studio; State Judiciary Complex;  Adire Mall, Itoku; amphitheatre and inspected 250 MTR specialist hospital.
The President said he was excited with projects embarked on by Amosun whom he said had prepared himself for the position of the Governor long before he assumed duty as number one citizen of the State.
He appreciated Amosun for the foresight in turning the State around by engraving his name in the heart of Ogun people, saying “you have done well for the people of Ogun State with these projects.”
President Buhari described Amosun as a clever man and sought for his support as a member of the ninth Senate in moving the country forward.
The President said, “I think the way he names those projects and the publicity he gave by every position, we see ‘Legacy Projects’
commissioning today, I think he has prepared for this governorship, he has prepared himself for it, he has put in place infrastructure that would last.

“I congratulate you for having the foresight to make sure that his imprint remains indelible. A very clever person, thank you.
“In the infrastructure, he took me through the flyovers, the bridges, the hospital, and this your outfit (judiciary complex), they are first class.
“I think you have done well for yourself and for Ogun State.”
The President admitted that God had elevated Amosun with his election into the Senate, noting that he would continue to serve not only the State but the country as a whole.
Amosun in his address said he his desire to continue contributing to the socio-economic development of Ogun would remain undiluted.

He appreciated the federal government for complementing the effort of his administration in bequeathing legacies that would stand the test of time.

The outgoing governor said, “For us and for the good people of Ogun State, a great journey of eight years will come to an end at midnight on Tuesday 28th May 2019.
“Even as we prepare to bow out of office, our desire to continue to contribute our quota to the socio-economic development of our dear State remains undiluted.
“Today’s event is an eloquent testimony of that desire. Even at the twilight of the tenure of our Administration, we continue to ensure that life becomes more comfortable and abundant for our people through infrastructural development.”
Governors of Lagos, Ekiti, Ondo Messers. Akinwunmi Ambode; Kayode Fayemi and Rotimi Akeredolu were in attendance and also Revd. Omotola Oyediran, former Chairman, African Newspapers of Nigeria Plc.
AmosunBuhariogun
Share FacebookTwitterGoogle+ReddItWhatsAppPinterestEmail