‘All we have received are empty promises’

•Residents of a community where flood keeps claiming lives, lament 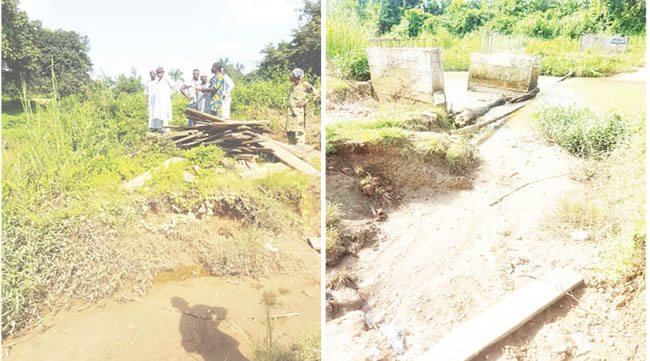 Despite losing members of their community to flood within the space of a few years, residents of Igisogba community in Omi Adio area of Ibadan are crying out over long-term unfulfilled promises by government. ADEOLA OTEMADE reports.

The Igisogba community in Omi Adio area of Ibadan is like most rural communities in the country. Despite living without basic infrastructure, people still find a reason to be happy in their lowly state. However, once in a while disasters bring tears reminding residents of the poor state they have been stuck in for years.

Being a community with a river running through it, there had always been a need to construct a bridge to link both parts of the community together for easy accessibility. Despite many appeals by residents to government for something to be done about the bridge and with most of them unable to pool resources together, the bridge was left unattended to for years.

Unfortunately, a heavy rain in June 2016 simply exposed the residents to a disaster which left lives and properties destroyed. As usual government officials visited the community to commiserate with the affected residents, promising to offer a hand to bring succour through financial assistance, and better still, construct a bridge and better drainage system so as to prevent a reccurrence.

Residents have since waited for years without having governments promises fulfilled.  They could only hope that one day government would remember them and do something about their plight.

One Nureni Adejumo, popularly known as Master, a retiree was the chairman of Oke-Odo community’s landlords association, one of the communities in Igisogba. On that fateful day, ‘Master’ had gone about his daily activities and later retired home after a heavy rainfall. He was said to have parked his motorcycle in the usual place close to an uncompleted wooden bridge, hoping to cross to the other side on foot where his home was located.

According to residents of the area, who spoke to Sunday Tribune, Master slipped and fell into the fast flowing river. A member of the community, who spotted his motorcycle, was said to have tried to check on him at home, only to be told that he was yet to return. The alarm was immediately raised and a frantic search ensued. Till date, his body is yet to be recovered.

The Chief Security Officer of Igisogba community, Mr Bola Olaiya, spoke to Sunday Tribune after the disaster which claimed the life of ‘Master’. He lamented grievously about the state of the community and how past governments, had promised an intervention. Till date, however, no action has been taken.

According to Mr Olaiya, “all those who had governed us in Oyo State had failed to do something as regards the bridge we asked them to construct for us; we kept voting for them, but we got nothing in return. This river you are looking at (pointing at the river) has been a problem for us since the past 18 years. We have been at it since then; we wrote to the government secretariat and the local government. There was a time some people [from government]came during [former Governor] Ajimobi’s tenure. They said they would write a letter to seek World Bank support. The then landlord’s association chairman asked them why the state could not fund the project on its own.

So, it is a big surprise to us that nothing has been done so far.  We implore the present government to do something about it so that this river will not cause a massive disaster in this area.

“We called on the lawmaker representing Ido Local Government Area in the state House of Assembly to come to our aid. We engaged 20 Hausa men to help look for the body [of Master], all to no avail. We are pleading with the present government to assist us concerning this bridge.

“Earlier this year, we lost two children to this same river. They were coming back from school and they wanted to cross over to the other side as their house is located there. After frantic search for them, we went to the government secretariat for help. We went to secretariat of Ido Local Government for help; everything fell on deaf ears. We are pleading with government to come to our rescue and help us out.”

A former vice chairman of Igisogba community, Mr Musiru M.A, who also spoke to Sunday Tribune said the whole community has been facing the problem since the administration of the late Governor Lam Adesina.

“He promised to give us light, but we told him we didn’t need the light; rather he should just do this bridge. Government sent people to us at different points in time, but nothing was done. And what we notice is that for the past five years, people have been drowning in this river.

“Some spiritualists even came to offer sacrifices, but nothing has changed. Within a space of two years, five people have died. Nureni Adejumo was someone that everyone loved; his commitment towards the growth of the community was unquantifiable. His demise really became a burden to us; that is why we raised the alarm for government to come to our rescue,” he said.

The financial secretary of the community, Alhaja S.T Olabisi, also laments bitterly about the tragedy.

“[Master]was a good man loved by everyone. He retired as a teacher. Many times he contributed to the development of this community from his own pocket not minding the cost. Nureni was crossing over to his house when the bridge collapsed. Since then we have not seen him. This year too, we have lost two children to the river,” she said.

It was alleged that the Oyo State Fire and Safety Services didn’t respond to the call until two days after the incident. Sunday Tribune, however, gathered that they responded but their vehicle broke down on the way and the firefighters had to trek to get down to the location of the incident.

According to one of them, Ojeyinka Isiaka, the community came to the fire bridgade office with a letter address to the director of operations.

“We recieved the letter from this community stating that aman was trapped inside the river and we had to respond. Even our truck is still on the road; it developed a fault, so we had to take public transport to get us here to know the situation of things. And for the countless efforts they have been making to get governments to help them, they have to keep up the pressure,” he said.

The General Chairman of Igisogba community, Taiwo Adesokan, who also spoke on behalf of the community, said efforts have been made to draw government attention to the problem in the community but nothing has been done so far.

“We have been everywhere, including state secretariat. This will be the fourth time such will be happening. All the money contributed by the community members has been spent on the pedestrian bridge. All the government has been doing is promising us that they will repair it. We are begging the Oyo State government to help us and do something about it.

The caretaker chairman for Omi Apata Local Council Development Area, Honourable Sheriff Adeojo, while speaking with Sunday Tribune said steps are being taken, and work is in motion on the construction of the Igisogba community bridge.

“Initially, I went on inspection with my management team. The engineers inspected and did a thorough investigation on the whole bridge, and I think we had a proposal on it. What we were trying to do was to wait for the rain to be over, so we would be able to construct a pedestrian bridge and get approval for the main bridge which is going to be a massive project.

“Unfortunately, I only learnt of [Master’s death] a few days later. As of the time I was informed, I was in a meeting with the state governor. Immediately, I sent my management team to the scene for them to allay the fears of the community members as regards the bridge construction and that it will be done as soon as possible.

“My management team immediately wrote a letter to the Oyo State Emergency Management Agency (OYSEMA) and another letter to Oyo State Fire and Safety Service. The following day I went there in person.

“I met with the late chairman’s son and discussed all what to do, and immediately after that we pushed the proposal up. We went there to see if they could retrieve the body but it was to no avail.

“After that, I had a security meeting to see how things could be done. I believe work is going to start as soon as we get approval from the state government. I am very sure of the pedestrian bridge. But as for the main bridge, I will push and follow up for the project to be approved,” he pledged.

The power of education