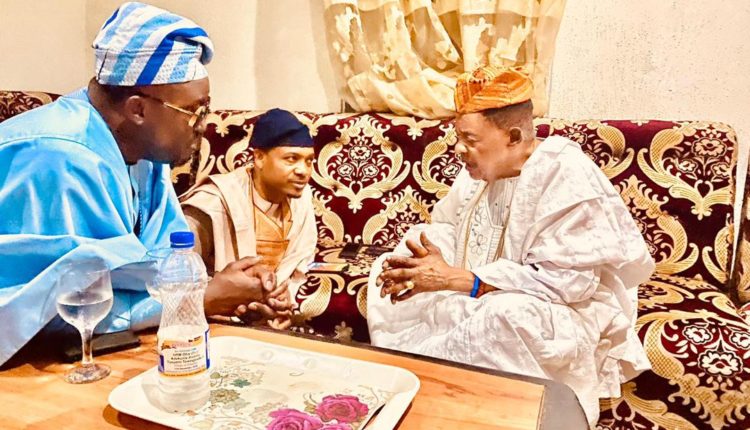 The chieftaincy titles of Ayedero and Atobase of Yoruba Land respectively were conferred on Politician, and businessman Hon Shina Abiola Peller, member of the Federal House of Representative representing the Iseyin/Itesiwaju/Iwajowa/Kajola Federal Constituency in Oyo state and US-based Dr. Babajide Agunbiade, a businessman and Subsea Engineer.

In his appointment letter to both Dr. Babajide Agunbiade and Hon. Shina Abiola Peller, His Imperial Majesty and the permanent Chairman, Oyo State Council of Obas and Chiefs, The Alaafin said: “The Alafin from time immemorial is the king and head of Yoruba Nation. He is the only King in Yorubaland who can confer chieftaincy title to a worthy man or woman to cover the whole of Yorubaland”.

The Alaafin further stated that any person that could be conferred with a title that covers the whole of Yorubaland must be of impeccable character. Against the backdrop of the principle enunciated above, Alaaafin stated he has in consultation with the Oyomesi, the traditional cabinet of the Alaafin, who are the kingmakers rigorously ascertained the character, business acumen, Philanthropy, and public dispositions of both Dr. Jide Agunbiade as Atobase and Hon. Shina Abiola Peller, as Ayedero of Yorubaland, found them worthy as thoroughbred Yoruba men who are culturally inclined and traditionally oriented personalities that can wear the toga of Yoruba royalty and to be a promoter of the institution of Chieftaincy.

In their acceptance letter, both Agunbiade and Hon. Peller felicitated with His Imperial Majesty, Oba Lamidi Adeyemi III on the 50th anniversary of his ascension to his forefathers’ throne. They praised Iku baba Yeye whom they describe as their father, as an encyclopedia of the Yoruba race’s culture and traditions and a bridge-builder in Nigeria.

Hon. Shina Abiola Peller from Iseyin, Oyo State is a Nigerian entrepreneur, Politician, Industrialist, and a Member of the 9th National Assembly. He is the chairman and chief executive officer of Aquila Group of Companies and Club Quilox. Hon. Shina Peller is an exceptional philanthropist who is selfless in many ways. He is a patron of several local and international charities.

Dr. Babajide Agunbiade from Fiditi, Oyo Stae is a Subsea Engineer with over 20 years’ experience in the offshore industry. He has been involved, at a significant level, in virtually all the shallow to deepwater projects in Sub-Saharan Africa, the North Sea, and the Gulf of Mexico.

Dr. Agunbiade has completed over 2billion USD offshore production projects. He is a member of The Nigerian Society of Engineers, Society of Underwater Technology, and a Fellow of the Institute of Industrial & Systems Engineers, amongst others. He has a combined honors degree in Industrial and Production Engineering from the University of Ibadan, a graduate of the General Electric (G.E) advanced engineering master’s program. He is G.E green and black belt certified.

In addition to many of his training, Dr. Agunbiade holds a master’s degree in organizational management, an MBA from the prestigious AIU in Houston, Texas, and a Ph.D. in leadership and Business from HPCU, Atlanta, Georgia. He is also a Ph.D. scholar in Environmental policy at Texas Southern University.

The chieftaincy induction and ceremony is expected around March 2021.

Gen Buratai as African Steward Man of the Year 2020