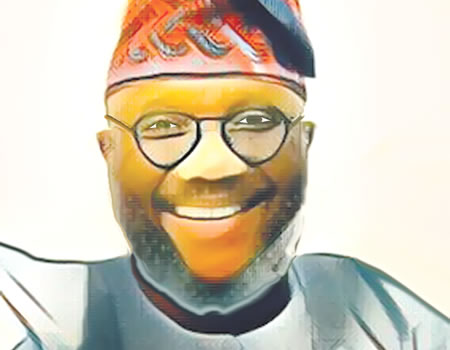 ADEKUNLE Abdulkabir Akinlade has not only become a household name but is also cherished by many across Ogun State.  Akinlade is an inspiration and a man of great integrity. A political scientist and successful business man thus, the great synergy between him and his mentor, Senator Ibikunle Amosun (CON, FCA). In 2015, Adekunle Akinlade contested for a seat at the Federal House of Representatives and was elected as a Member representing Egbado South/Ipokia Federal Constituency. Akinlade, despite being a first term legislator; his eloquence, friendly nature and expertise in interpersonal relations earned him great respect and was appointed as the Deputy Chairman, House Committee on Climate Change, Chairman Sub-committe on Environment, Steel and Finance. Chairman ad-hoc Committe on Insurance. He was also a member of the following House Standing Committees: Finance, FCT, Public Procurement, Army, Steel and Insurance.

Despite coming into the 8th Assembly when the economy was very weak and the country just slipped into recession, he was able to attract many laudable projects to his Federal Constituency which include: Maternity hospitals, blocks of classrooms, Primary Health Centers, rehabilitation of the Owode/Sango and Owode/Ilaro roads, Employment for Youths, Procurement of grader machine for the constituency, training of women for self-employment in snailery and entrepreneurship. Grading of roads from Agosasa to Idopetu, Idauku, Bode Ase, Idosa for easy accessibility of the people to markets and travel. He stood out and distinguished himself as a parliamentarian per excellence sponsoring many constructive Motions amongst which led to the deployment of Nigerian Naval presence at Tongeji Island, Ipokia which borders Benin Republic. This culminated in the establishment of a Nigeria Naval operational base, construction of a school and other amenities on the island by the Nigerian Government. The rehabilitation of Owode/Sango, Owode/Ilaro roads and subsequent budgetary allocation are evidence of his doggedness, ability to work with others and capacity to get things done.

Through constituency projects allocation, Hon. Akinlade also empowered over 1000 constituents with various items including generators, tricycles (Keke NAPEP), motorcycles, freezers, grinding machines, sewing machines, gas cookers with burners, hair dryers, farming tools and many more. In the 2017 Appropriation Bill, he was able to attract projects worth about N679,000,000 to his Federal Constituency which include further rehabilitation of the Owode/Ilaro road, Construction of Magistrate Court House in Oke-Odan, rehabilitation of 8 blocks of classroom in Idogo, Akere, Ibatefin and Agosasa. Rehabilitation of Agosasa Town Hall, provision of hand pump boreholes, maintenance of Sango Ota/Idiroko road, Owode/Ilobi Erinja roads, vocational training for women and youths, supply of school furniture and many more. At the end of his tenure as MHR, he had empowered over 3,000 women, youths and entrepreneurs in his constituency.

Hon. Akinlade started his guber voyage in 2017 when he launched his state-wide consultations as a member of the All Progressive Congress(APC). He consulted party leaders, elders, traditional leaders, opinion moulders and other key stakeholders. Due to his forthrightness, tenacity and clear vision on how to sustain the rebuilding mission after Senator Amosun led administration, the clamour for a Yewa/Awori man as governor after almost 43 years of the state creation, the Ogun West Elders Council led by Chief M. A. Olagbayi screened over 10 aspirants on September 6th, 2018 at Late Deacon Poju Adeyemi’s residence in Ibara, Abeokuta from where Triple A, as fondly called, emerged the consensus candidate from Ogun West and was officially declared the APC consensus candidate by the Ogun APC led by Chief Derin Adebiyi at the party’s secretariat in Abeokuta on September 7th, 2018.

It was a sigh of relief for the Yewa/Awori  to have the support of a sitting and popular government from the Central, until it was reported that some aspirants from Ogun East with many of them returning to the party few weeks earlier had lobbied the national secretariat of APC to denounce the consensus agreement and call for a direct primary. This group from the East, rejected both the consensus agreement and indirect primaries purposely to achieve their self help agenda because they were not popular in the state. To this end, the direct guber primary was shifted twice and on the third occasion, it was won overwhelmingly by Hon. Akinlade on Tuesday October 2nd, 2018 but on Wednesday 3rd without any evidence of another primary election conducted in the State, the APC NWC Muhammad Ndabawa-led committee announced Prince Dapo Abiodun as the candidate of the party at an hotel in Ikeja Lagos.

Appeals to the Oshiomole led APC National Excos to reverse the unfortunate pronouncement and declare the actual winner fell on deaf ears as the APC cabals were determined to “deal” with Sen. Ibikunle Amosun because of his closeness to President Muhammadu Buhari, GCFR. What started like a joke became real upon the submission of Abiodun’s name to INEC. Left with little or no other choice, Hon. Akinlade led thousands of his supporters and loyalists to what many refers to as the cassava party – Allied Peoples Movement. APM was officially launched in December 2018 and its candidates had to endure a very tedious, rigorous campaign. It was the biggest offset of all times and the cassava revolution was born. This effort was championed by the party’s gubernatorial candidate, Hon. Akinlade and leadership of his campaign structure led by a seasoned politician and former minister, Alhaji Sarafa Ishola. Within 60 days, Akinlade had transversed the 236 wards of Ogun State, discussing his blueprint. He was loved and hosted to warm receptions across the state.

Dealing with rising cases of suicide

Children’s lives matter: A case of safety first in reopening of schools

Tambuwal and his strides in Sokoto

The sociology of Nigerian hushpuppism