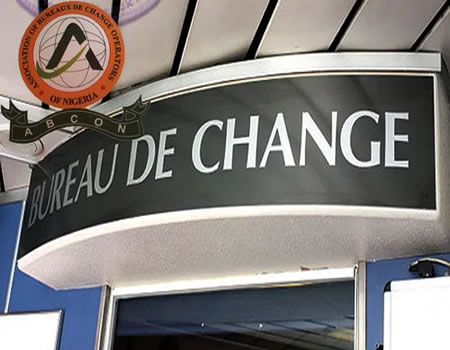 The Association of Bureaux De Change Operators of Nigeria (ABCON) has called for a downward review of the cash processing fees introduced by the Central Bank of Nigeria under the cashless policy.

The Association made this call in the ABCON  Quarterly Economic Review for third quarter of the year (Q3’19), stressing that though  the objective of the policy is laudable, the cash processing fees will  have severe impact on small businesses across the country.

“While the objectives of the policy are quite laudable and developmental in nature, a major observation is the consequent effect on small and medium scale business circles in Nigeria where business confidence is still largely low. Because of this, a good volume of businesses are still largely in cash especially in the rural areas. Thus due to the likely negative effects in this critical segment of the economy,  we have recommended a lower processing fees  of between 0.5 per cent to 0.75 per cent and one per cent to 1.25 per cent for individual and business account holders respectively.

“The impact on the general economic performance and compliance to cashless policy would be observed and analysed for further amendments.”

ABCON also cautioned against the proposed increase in the Value Added Tax (VAT) to 7.5 per cent from 5.0 per cent, insisting that the increase will lead to more unemployment and poverty in the country.

The Association also faulted the move to expand the VAT net while also increasing VAT rate at the same time, as a conflicting strategy.

It stated: “The immediate implication is that every Nigerian will either directly or indirectly be affected by the whopping 50 per cent increase in VAT. The average VAT collection in the past six years is about N900 billion. The revenue is shared 15 per cent to the federal government, 50 per cent to states and 35 per cent to LGs net of four per cent cost of collection to FIRS.

“But beyond the revenue increase of about 50 per cent, there will be other attendant consequences like higher inflation rate, interest rate hike, more unemployment and people will generally become poorer.

“It will increase the burden on the poor and SMEs contrary to the 2017 National Tax Policy. We also believe that seeking to expand the VAT net while also increasing VAT rate at the same time is a conflicting strategy.

“Instead ABCON review is of the opinion that the system can generate twice as much from VAT at current rate by expanding the scope of threshold and ensuring a robust administration rather than by increasing rate. A review of VAT waivers, better policing of the border to improve import VAT collection, framework for VAT on imported services and digital economy.”

On the other hand, the Association expressed concern over the rising level of the nation’s public debt, calling on the federal government to express caution and reduction in the public debt.

In its review of the BDC subsector in Q3’19, the Association called on BDC operators to develop strategies for attracting autonomous foreign exchange as well as for boosting inter-BDC trade  so as to reduce dependence on CBN intervention.

“As business confidence increases within the BDC sub-sector, traders should improve on strategies to attract autonomous foreign exchange sources as against rigid concentration of CBN intervention funds.

“With volumetric increase in foreign exchange liquidity within the sub-sector, INTER-BDC trade will be promoted resulting into dynamic exchange rate regimes derivatives. Thus, the framework and structure must be developed by the regulatory bodies and ABCON through adequate policies and supervision,” it stated.

The illusion and reality of FG’s 2020 budget