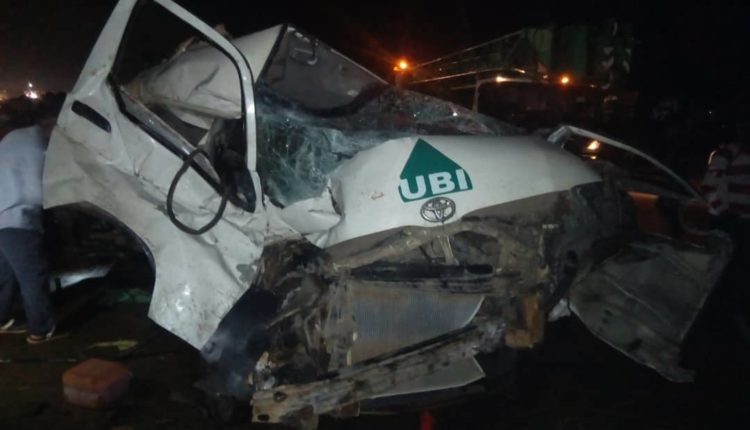 Share
Eight people lost their lives in a multiple crash on Wednesday evening at the Sagamu end of the Lagos-Ibadan expressway.
The road crash, according to the Ogun Sector Commander, Federal Road Safety Corps (FRSC), Clement Oladele, occurred around Danco filling in Sagamu.
Those who lost their lives include a male child, six male adults and a female.
The FRSC commander in a statement signed on his behalf by FRSC Public Education Officer, Florence Okpe, said preliminary investigation had it that the accident could have been caused due to excessive overspeeding.
Oladele said a container fell on two commercial buses while some vehicles rammed into it, thereby causing the traffic crash.
The FRSC boss said 43 people comprising 38 males and five females were involved on the crash, leaving 12 people injured.
The vehicles involved include two white coloured Toyota Hummer buses with registration number LAGOS LSR560XJ and XD792EZA; a white coloured DAF Truck marked LND04XX; an ash coloured Toyota Corolla with registration number LAGOS APP196BQand a red coloured Tanker DED776XA.
Others include a white coloured tanker marked LAGOS APP248XT and an ash coloured Toyota Sienna SUV ABC512ZV.
Oladele enjoined motorists travelling on the high to observe a maximum speed of 50km per hour since the highway is still under reconstruction.
The injured victims were evacuated to the Olabisi Onabanjo University Teaching Hospital ( OOUTH) Sagamu and FAMBIS Hospital, Mowe while the remains of the dead ones were deposited at the Olabisi Onabanjo University Teaching Hospital ( OOUTH) Mortuary, Sagamu.
Commander Oladele advised members of the public whose relatives travelled during this period to contact the FRSC Commands  in either  Sagamu or  Mowe or could approach the  two hospitals the victims were evacuated to.

What will Lawan, Gbajabiamila do differently?

JUST IN: Rochas Okorocha sworn in as Senator