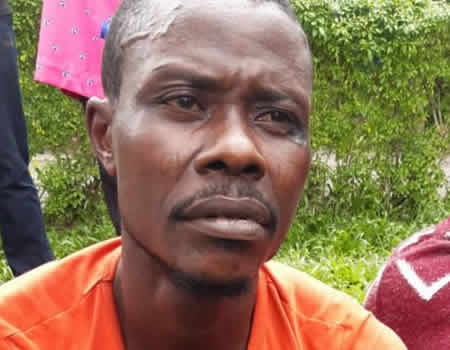 FOR the alleged brutal killing of his mother-in-law, Mrs Alice Monday, a 44-year-old tipper driver, Mr Edoghogho Omorogbe has been nabbed by the police in the Edo State capital of Benin.

Besides his mother-in-law, the suspected killer, who was paraded along with 100 other suspected criminals by the Edo State Commissioner of Police, Mr DanMallam Mohammed in Benin yesterday, is also accused of killing his 25-year-old sister-in-law, Miss Blessing Monday, and her eight-month-old infant.

The suspect reportedly committed the heinous crime on September 10, 2019, at their residence at Iguadolor Community, in Ovia North-East local government area of the State but the remains were only discovered a day after the murder.

A two-year-old girl who was inside the room at the time of the attack, however, escaped unhurt.

The suspect who spoke with reporters at the police headquarters confessed that he killed the victims as they were always in the habit of hiring hoodlums to beat him up anytime he quarrelled with his wife.

The killer tipper driver explained that since the rains started, he has been inactive but now make do with menial jobs.

“I didn’t know the cutlass will meet the baby. After I killed them, I ran away. Later I came out and went to tell my father what I did. I have not seen my wife since I killed her mother and sister.”