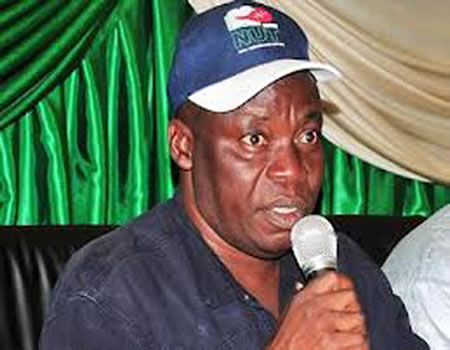 THE leadership of Nigeria Union of Teachers on Wednesday lamented what it described as the “insensitivity” to the plight of Nigerian teachers by some state governments, saying about 28 states are currently owing their teachers backlog of salaries.

NUT President, Comrade Michael Alogba Olukoya, who spoke in Abuja, also warned that the Nigerian teachers would resist with vehemence any attempt to handover primary education to the Local Government Councils in the country.

He spoke at a two-day workshop on commercialisation and privatisation of education, jointly organised by NUT and Educational International (EI) for the National Executive Council (NEC) members of the union.

He said the Nigerian teachers were confronted with many challenges, including the recent Boko Haram insurgency which claimed the lives of many teachers in the North-East part of the country.

Olukoya, particularly, commended the teachers and NUT leaders from Borno State for remaining undaunted and never allowed the challenge of Boko Haram insurgencies to cow them.

He added that economic recession came to worsen the situation for teachers in Nigeria with many teachers being owed by their state governments.

He said: “Apart from the Boko Haram, recession, we also have the issue of salary  payment. As I speak, almost about 28 states, one way or the other are owing our teachers,” he said.

He condemned the commercialisation and privatization of education in Nigeria, saying the policy has left education in the hands of private proprietors of schools who charge outrageous school fees in the bid to make profit.

In the same vein, Olukoya, said the union was not against local government autonomy as being clamoured by the National Union of Local Government Employees (NULGE), but insisted that putting primary education in the hands of local councils would be counterproductive.

“If we attempt to put primary education under the purview of local government administration, we shall be going back to analogue. We will not allow that to happen.

“I urge the government of President Muhammad Buhari and Vice-President, Professor Yemi Osinbajo to stand their feet on the ground to say no to return of primary education to local councils,” he said.

The NUT President, however, thanked the federal government for facilitating the recent release of 82 Chibok girls, urging the government to ensure the the release of the remaining girls in captivity.

He used the occasion to appreciate the government of Ogun State for pardoning the last three teachers that were dismissed from the teaching service in 2015.

Meanwhile, the NUT President, Olukoya, called for prayers for quick recovery of president Buhari while also urging Nigerians to stop talking ills of the nation’s leaders.

He directed teachers in various states of the federation to organise prayers for the quick recovery of the president. He said the President should be appreciated for his resolute fight against corruption that had brought the nation on its knees.