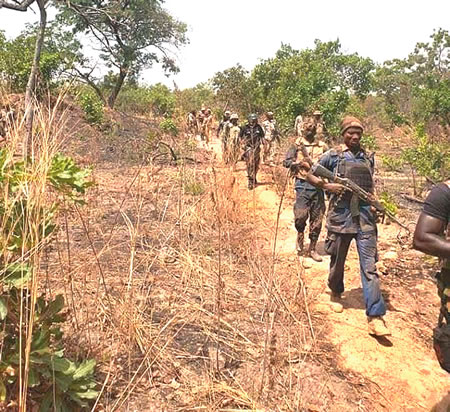 Communities in Munya local government area of Niger state have reportedly sighted some suspected armed fleeing bandits that were allegedly stranded and perambulating/walking aimlessly around the areas apparently in search of food items barely 24 hours after killing four soldiers in an ambush.

The bandits, according to impeccable sources were no fewer than about 30 in numbers and were believed to have been involved in the attack that claimed the lives of about four soldiers that were deployed in a joint military task force by the state government and other civilian victims in the area.

Nigerian Tribune gathered that the “the bandits were armed with sophisticated guns, while insider sources who spoke to our reporter on the condition of anonymity said “we are convinced that these strange people were earlier involved in the attack on Sunday during which some soldiers were killed.

It was further learnt that the attackers were currently stranded in communities in the troubled area.

In a report monitored on Monday in Minna, that state capital the state’s Radio station confirmed that several men riding on motorcycles have been sighted in some villages in Munya local government area of the state.

Speaking through his Vice-Chairman, Hon. Luka Garba, the Chairman appealed to the state government to beef up the security of the area, adding that “the villagers have since abandoned their homes for the bandits.

According to the report, residents of the communities have fled their houses for fear of possible attack.

Further checks, however, revealed that the bandits are currently moving from one location to the other, looking for a safe exit from the communities as they feared that their entry route may no longer be safe for them.

“The affected communities were named as Sohon kabula, Luwi, Rufogo, Mudungo, Beni and Toko while the villagers have reportedly abandoned their homes.

“It was further learnt that the bandits have currently run out of fuel in their motorcycles, food, other logistics and have therefore shared themselves into three groups with some, in new Kabula and Mangoro communities.

“They are all strangers because they do not know where to go and how to get out of the communities, that is why they want the people to show them where to follow.

“Some of the hoodlums also refused to follow all the routes that the people of the area showed them for obvious reasons. So, right now, I can tell you that they are stranded.

If the security agents can move in now they will capture them”, said a very reliable source who would not want his names in the prints.

Meanwhile, when the Image Maker of the State’s Police Command DSP Mohammed Abubakar was contacted by our reporter about the incidence, he said that a detachment of police operatives have been deployed to flush out suspected criminal elements from the affected troubled communities.