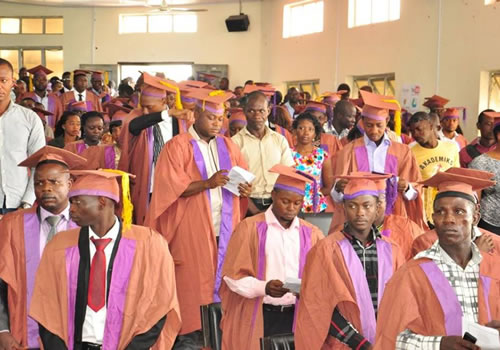 EKITI State University (EKSU), Ado-Ekiti, at its 24th convocation ceremonies held last week, conferred a total of 18,685 students’ degrees, diplomas and post-graduate diplomas, and gave them a charge to go and make positive impacts on the world.

On the occasion, the vice chancellor, Professor Samuel Oye Bandele, also announced that 24 of the graduating students bagged First Class degrees, while in the postgraduate class, 78 got PhD degrees.

He disclosed also that 366 got Master’s, 127 got professional Master’s degrees, and 118 received Postgraduate Diploma.

The Visitor to the university, Governor Ayodele Fayose of Ekiti State, in his speech at the ceremony lauded the governing council of EKSU, headed by Prince Adedayo Adeyeye, for appointing Professor Oye Bandele as the vice chancellor, describing him as a right choice.

To the graduates, Fayose said: “The queue out there is long, and white collar jobs are rare. Those who even have such jobs, are they paid regularly? The situation is getting tougher every day, and we must all invest more in agriculture.”

He called on Nigerians to pay more attention to agriculture, saying there is already food insecurity in the country that must be tackled.

On the occasion, Governor Henry Seriake Dickson of Bayelsa State; the Alara of Aramoko, Oba Olu Adeyemi and a lawyer businessman, MrGbengaOyebode, were conferred with honorary doctorates for their various contributions to the growth of the society.

In his acceptance speech, Governor Dickson, who was awarded a doctorate in Public Administration “in recognition of his exemplary leadership as a representative of his people at the federal legislature and governor of Bayelsa, thanked the people of Ekiti State for the honour, and also urged them not to despair as a result of the economic downturn in the country, saying it would pass away.