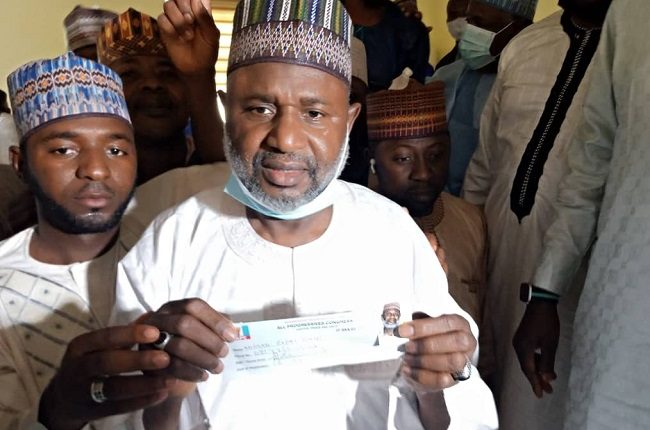 Former Governor of Zamfara State, Senator Ahmad Sani Yarima Bakura has finally revalidated his APC membership after he was refused by chairman of his polling unit of his constituency in the state but senator Yarima says he has forgiven everyone on what transpired.

Senator Ahmed Sani Yarima who was finally been registered in Gusau on Wednesday evening shortly after the stakeholders meeting, was registered of his Tulluwa (3) at Bakura local government area of the state.

He was registered by the Committee Chairman of Bakura local government Registration Muhammad Muttaqa Rini in the present of the state APC Caretaker Committee, Lawal M. Liman and other APC supporters in the state.

The revalidation exercise was witnessed by the Committee sent from national headquarters of the APC-led by Sen. Abba Ali who doubled as Zonal Vice Chairman in charge of the North West for the voter registration led other members of the national committee to witness the event.

Speaking shortly after the register Senator Ahmed Sani Yarima who expressed happiness with the development said, he is grateful to President Muhammad Buhari and National Caretaker Committee for their intervention.

“I have forgiven everyone for whatever travail passed through.”

He advised all party supporters to come out and revalidate their register and continue to work for the progress of the party.

The surprise visit made on Friday night by the leaders of the ruling All Progressives Congress (APC) to former President Goodluck Jonathan at his residence in Abuja triggered a stir in the major political camps, resulting in at least four possible theories..Senator Yarima Bakura  Senator Yarima Bakura