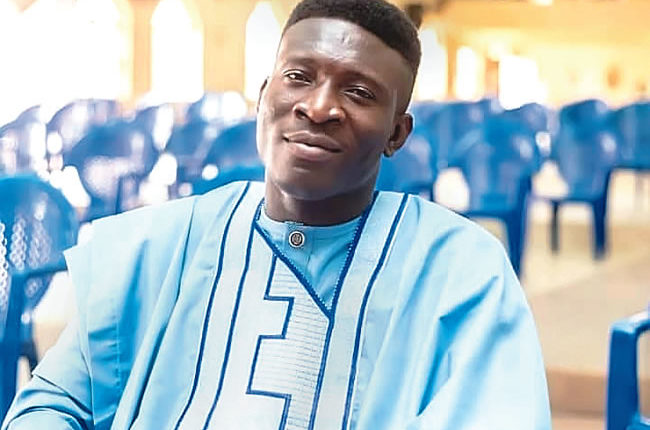 Joshua Peters is an actor, director, playwright and singer; he was among the casts of the popular Alfa Sule dance drama. Right now in Nigeria, he is an evangelist of stage plays and drama because, according to him, there is no media as great as having to watch a live play or drama. He has worked with acts such as Dele Odule, Ayo ‘Woliagba’ Ajewole, Peter Fatomilola, Bukunmi Oluwasina, among others. In this interview, he speaks with FAVOUR BOLUWADE about his skills, the entertainment industry and his quest for excellence. Excerps:

You came into the limelight through the dance drama crew popularly known as ‘Otigan pa’, would you say that was just a pathway to fame?

I did come into limelight through the Alfa Sule dance drama. We were all just doing our thing; what we loved. And it was a good one, it was just a couple of teenagers and youths being invited for events and it just blew. None of us joined with the intent of being popular, we just wanted to dance and act at the same time. That was why I joined. In 2008 when it became the talk of town, we were amazed, but I didn’t join the Alfa Sule crew with the intent of being popular when we started in 2005.

How do you feel about featuring in secular movies?

I don’t think I am concerned with it being a secular movie or not. I am just really concerned about it being a good story and its standard, so if you call me for a production I will ask for your script, I know those I want to work with and see how to go from there. Honestly, I would rather work with people that will step me up in my career, rather than a production that will retard my career. And then over the years, I have set a standard for myself and anything less than that; I won’t do it. People will use money to pursue you but I will not hike my price for a bad story. I will tell you I won’t do it if I am not okay with the story. The truth is I have had to turn down more secular stories. Nothing out of the ordinary, it is just about the story and the standard of the production will be.

Do you think there can also be a well-produced and well-accepted secular dance drama?

I believe that there can be a well-written, well-scripted, well-produced secular dance drama but I have not seen any.

Most people don’t understand the essence of stage plays, which is something you are known for, would you shed light on that?

Which would you prefer between scenarios being narrated to you or you are seeing it in real time? You will prefer the latter really. That is how I love to answer this question. You would love to see the details. The feelings that stage plays give, trust me I don’t think there is any other type of medium that can give it. There is a connecting tissue between the performers and the spectators. You know when you see the actors, you can point at them, you can tell what they are saying and you are seeing them in full, not just a close up. You see them as they walk in. When they make a mistake, you know. What stage plays give is that it makes it raw and pure. No other work of art can really portray that. When you get into the theatre, you can tell what they are feeling. When you see the other forms –the cinema, CDs, YouTube, video apps, I believe it is trying to imitate the feelings that the stage play gives; the closure and connection. You can’t substitute the feeling of the stage with those mediums. Stage play also gives spontaneity, which I tell you other forms of art cannot give. There is no cut, take it again, and cut. That is the feeling.

You directed one of the stage plays, entitled, ‘1860’ on Independence Day, which sold out in Ibadan, how did your directorial experience start?

I have been directing way back and I started professionally in 2013 when I directed a two-cast play, ‘Thank you Lord’. As a director, directing two casts on stage is quite strenuous, but I achieved my aim because it turned out well. I had my flaws too, they were pointed out to me; I got accolades though.  Afterwards, I paid attention to my director coach and watched her closely in person of Toyin Ogundeji. I saw how she did her things so unconventionally. I love when I am unpredictable and I believe that is the core of my directing style; when my audience does not know where I will get at them. The suspense is exhibited in how I write too.

Are you currently on a movie set?

I have plans to feature in movies as long as the cast, crew and story are good. I will not settle for less.

Do you have any plan in stock for your fans? Any project you›re currently working on?

There is something we are working on.  I have another stage play coming up later in the year or early next year; it is entitled ‘Freedom Park’. I will be working alongside Samuel Olaseinde (Ajirebi’s son). It is also a two-cast play. The play is revolutionary; it speaks volume of what is going on in Nigeria. I am working on it among other plays. I wrote and directed the play. I work on movie sets every day. I work with Ayo Ajewole (Woliagba) often behind the scenes; if I am not working there, I am on another production set. Every day!

Why do you think people love and widely accepted the Alfa Sule dance drama group then?

Have you seen the production; you would love it, because of its uniqueness.  It is funny, carries the messages and people have been thrilled by the distinctness. You know, having just one person speaking and a number of actors enacting and miming everything he is saying words for words is highly thrilling, which includes the intonation, the pace and tone of the speaker. Over time, dance drama as usually noted by the actors doing both the talking and the acting. I think people love the rhythm too.

What faults have you noticed so far in the Nigerian entertainment industry and how they can be sorted?

I tell you, the reason for this will be because of the number of substandard production that has come out of the industry so far. I am talking about taste; it doesn’t paint the Nigerian entertainment industry as fine, or rich. I am not talking about money; but values, taste and as one that has it highly. We have crafts, skillful and talented people, but the fact that we have people running after money and fame at the detriment of good works, good productions is a major problem. I think if we have an active board that regulates this; you know that when you put out a production and the board can state it is not fit to be produced, and then you will think about the rigour, time spent, money invested and resources, hence you would want to put out standard productions. Truly, it is not about putting out many productions; it is about how well, about putting out few productions that are up to standard in terms of picture quality, relevance and the story being told.

You also have your own drama crew; what is special about your group?

I will not call it a group but rather refer to them as colleagues whom I have worked with over the years; you know people who understand my style, message and they just get it without explanations. These are people we have worked together over the years. My craft is what is special about my work and style of production. It is usually a total performance. You will not see any of my production that will not have music and dance; music with a three part and heavy dances.  I have got people who are total performers who can sing, act and dance. These are people I work with. You will not just hear ‘talk talk talk’ alone in my productions.

How do you appeal to your audience?

I think when you sit in the theatre to see my productions, you will have mixed feelings. I take you back in time, I make you remember old songs; Fela, Haruna Ishola, Lagbaja , then I juxtapose these with  Davido, Joeboy, Burna boy.  I believe that is something that is really appealing. The major thing is my productions always move with the trend. ‘o por’ or ‘fem’ or ‘wahala for who no get’ are trends right now, if you see my production tomorrow, you will see it there. The 1860 stage play I directed had the use of ‘you will suffer for 600 years” phrase despite it being a historical play. These are ways I get to my audience.

What about your best moments?

My best moments are two; the satisfaction from knowing that my audience enjoyed my play which you will get from comments and accolades, which helps me to know my craft is relevant and is appreciated. I also get a good feeling when the show is sold out; hearing that there are no more seats because of overflow is always an exciting thing to hear.

Your most embarrassing moment?

My most embarrassing time on stage was during one of my productions in Oyo State, where people were enjoying the play until we got an awkward applause from the audience; the kind you get when people want you to start going. It was later we realised the people were not used to it in the environment. I was embarrassed as an actor and director. And there was a time my trousers tore on stage.

What do we not know about you?

I am the first of four children, raised by a single mom. I am an all-round entertainer. I anchor events and do scripts consultation. I have a diploma in Drama and Music from Obafemi Awolowo University and I furthered to major in Drama. It is interesting to know that I was a science student who wanted to be an electrical engineer and realised what I wanted to do. I love wires and cables and I still play with them but I have come to know that it is best to pursue your passion. I am not where I want to be yet but I have got satisfaction to get better and put my crafts out there. I am single.

#EndSARS: Our government’s pampering strategy and a hypocrisy that stinks