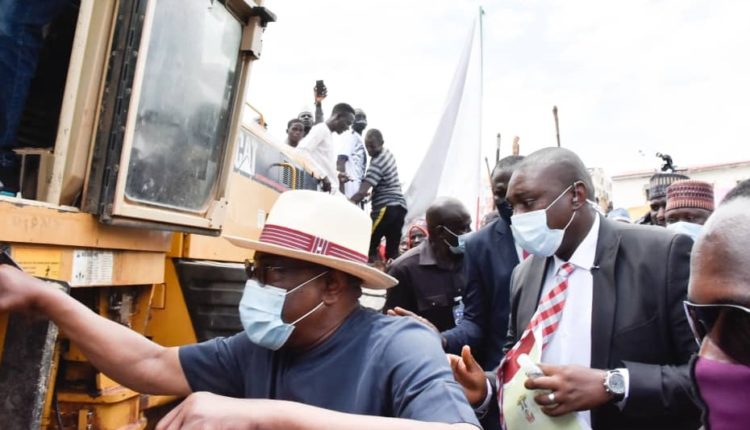 The need for peaceful coexistence among Nigerians to pave way for development in a democratic dispensation has been stressed considering that no meaningful progress can be made in a chaotic environment.

The assertion was made by the Rivers State Governor, Nyesom Wike while on a one-day working visit to Bauchi on Saturday saying that a united people can positively move ahead no matter the challenges.

Nyesom Wike who flagged off the construction of township roads in Bauchi declared that democracy is all about working for the good of the people irrespective of political affiliation because according to him, as soon as elections are over, governance is all-encompassing.

The Rivers State Governor added that government must provide dividends of democracy for the people who elected it stressing that governance is an act of trust which must not be Betrayed by those elected into offices no matter what happens.

He then called on the beneficiaries of the road projects to ensure that it was maintained and used appropriately because according to him, that is the only way the Governor can be motivated to do more for them.

In his speech, Bauchi State Governor, Sen Bala Mohammed Abdulkadir said that the project, when completed, will ease intra-township commuting to decongest the metropolis considering the rapid growth of the Bauchi township.

He added that the township roads his administration embarked upon are to further open up the Bauchi metropolis in order to make it a befitting state capital in tandem with its contemporaries lamenting that it has lagged behind enough since its creation many years ago.

The Governor then appealed to all property owners affected by the construction to immediately give way to enable the contractors to begin work and be able to to deliver as scheduled having been paid their compensations.

He then thanked his Rivers State colleague, Nyesom Wike for agreeing to come over to Bauchi for the flags-off saying that it was a demonstration of brotherhood and unity considering the distance between Bauchi and Rivers States.

EDITORIAL: FG’s Gaffe On Amotekun
FOR the umpteenth time, the presidency stirred the hornet’s nest recently. Against the run of logic and the law, it declared that regional security outfits such as Amotekun would be subsumed under the existing policy architecture.  Senior Special Assistant to the President on Media and Publicity, Garba Shehu, featuring…Wike stresses need    Wike stresses need

E Ink Tablets Are Fast Replacing Pen And Paper.
E Ink tablets are devices that allow you to do the things you can do with a pen and notepad, which is to take notes for keeps with the possibility of reviewing later. The simplicity of these devices is so amazing that using them is just like using pen and paper. Technological advancements have made lots of people turn to…Wike stresses need  Wike stresses need

22 Christians And Muslims Leaders Unite For Peace In Kaduna
Muslim and Christian leaders in Kaduna State have called on adherents of both religions to stop conducts that are unbecoming of their faith but to embrace peace instead. The leaders of faith spoke at Sir Kashim Ibrahim House, Kaduna when Governor Nasir El-Rufai inaugurated the House of Kaduna Family, a platform…Wike stresses need  Wike stresses need