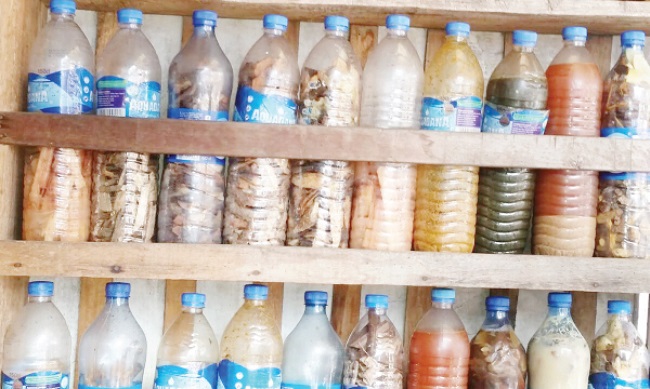 Now, in a new study, researchers say some of the herbs used in the treatment and prevention of malaria possess excellent antimalarial properties but are potentially unsafe in pregnancy because they can induce abortion and miscarriage.

The researchers at the Federal University of Agriculture Abeokuta carried out a random survey of herbs used in treating and preventing malaria in pregnant women in Southwestern Nigeria that also have the potential to induce miscarriage and abortion.

The researchers are Ayodele Babalola, Professor Olufunmilayo Idowu, and Professor Kehinde Ademolu. The 2021 study was published in the journal, Ethnobotany Research & Applications.

Structured questionnaires were used to obtain relevant information from 120 participants (43 pregnant and 77 women of reproductive age) from 3 major markets and 2 traditional birth homes (TBHs) in Abeokuta between 2019 and 2020. They studied their level of awareness about the potentially harmful effects of 3 antimalarial plants (with potential abortifacient properties) used during pregnancy.

These are Morinda lucida, Enantia chlorantha and Cymbopogon citatrus. Morinda lucida, also called “ezeogu, oruwo, and idonzakara” in Igbo, Yoruba, and Hausa, respectively, has enjoyed a considerable level of recognition for the treatment of malaria by many people in different parts of Nigeria.

According to the survey, a high proportion of the participants (71.7%) preferred to use herbs for malaria treatment during pregnancy. About 13.3%, 3.3%  and 4.2% of the respondents claimed to have experienced abortion, stillbirth and low birth weight (LBW) respectively.

However, the researchers said the use of herbs during pregnancy should be given careful consideration, considering that stillbirth and low birth weight (LBW) are known to be major complications of malaria during pregnancy.

They added: “The fact that stillbirth and LBW were slightly higher among those that use herbs in management of malaria during pregnancy indicates two things. It is either the herbs are not providing adequate protection against the parasite or herbs usage directly contributed to the occurrence of stillbirth and LBW in the study population.”

Though abortion was significantly associated with the use of antimalarial herbs among the women, none of them linked it to the use of herbs. A good proportion of the respondents  (43%) were aware that one of the plants used against malaria has the potential of inducing abortion. However, they still preferred to use it in presumably safe quantities.

Malaria affects mostly children under the age of 5 and pregnant women in sub-Saharan Africa. Despite the fact that the effect of malaria in pregnancy is highly devastating, the choice of drug for the prevention of malaria during pregnancy for those who patronise traditional birth homes is herbs.

In the journal, Bulletin of the National Research Centre, these researchers at the Federal University of Agriculture, Abeokuta, confirmed that Morinda lucida, Enantia chlorantha and Cymbopogon citatrus have antimalarial properties, including protection from malarial infection in the placenta. But these herbs also induced abortion and miscarriage by inhibiting the activities of the ovary due to progesterone.

In a previous study,  progesterone, an essential hormone produced by the ovary that helps in maintaining pregnancy was significantly reduced in mice treated with the plant extracts and consequently,  resulted in a high proportion of abortion and miscarriage in the mice. These findings were quite worrisome, and as a result, birthed this current study.

More recently, a systematic review, which aimed to determine whether herbal medicinal use during pregnancy was associated with adverse maternal or child mortality outcomes, found that topical use of almond oil was significantly associated with preterm birth, oral raspberry leaf with caesarean delivery, and heavy liquorice consumption with early preterm birth.

It is recommended for pregnant women to avoid using garlic prior to surgery, including caesarean section, as garlic was reported to have an anti-hemostatic effect and may consequently interfere with blood clotting.

Despite the absence of experimental studies in pregnant women, a 3-week experiment among 20 pregnant rats found that the aqueous extract of the bitter leaf has an abortifacient effect, and is associated with reduced serum progesterone levels.

A researcher, however, said caution is advised with the clinical use of bitter leaf during pregnancy, and particularly during the first trimester, as it may stimulate womb contractions.

What to know about high cholesterol