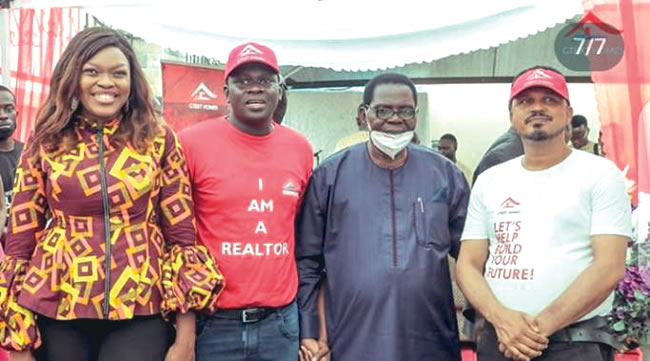 Music icon, Chief Ebenezer Obey-Fabiyi has commended real estate giant, Gtext Homes on its fifth  year anniversary, describing the company as one that secures the future for Nigerians, especially  the young minds.

Ebenezer Obey stated this while celebrating members of the Gtext Homes family on their fifth  anniversary, saying the company’s unrelenting pursuit of excellence in the reat estate business  was commendable.

Speaking on the raging EndSars protest, the legendary juju singer also praised Nigerian youths  for showing the old generation that they are not lazy youths.

Speaking at the event, which took place at Gtext Homes head office in Omole, Lagos, the music  maestro who stated that there is no way anyone can please the world, said that what the youths  are saying, many people have said it in the past. “This protest is a big surprise and no one was  expecting it. Everyone was pushed to the wall. EndSARS is a good movement because that is the  only way we can correct many ills and things that are not right in the country. Our leaders  should see this and think that something is wrong beyond our imagination. I pray God would help  us.”

Obey, who also advised artistes to sing meaningful songs that would stand the test of  time, while speaking on investments said, “People should invest in landed property. When you buy  a land today, by next year, it has appreciated in value. In five years, it is higher. The house  you build or buy today is an investment. A popular Yoruba adage says that ‘the money a young man  first makes he does not invest but eats it’ and that is not the wisest thing. Lands and houses  are the most secured investments. Lands cannot be stolen, but cars and other things can be  stolen. I built my first house when I was 27 years old. My father died when I was 38 and I had  built a lot of houses by then,” he said.

Chief Commander also added, “That is why I like Gtext, they are securing the future for a better  tomorrow. Immediately I stepped into Gtext, I saw the pursuit of excellence, and that shows that  the organisation will continue to grow. To have 10 estates within five years is no small  achievement.”

Also speaking at the event was Stephen Akintayo, MD Gtext who said, “For us at Gtext, we like to  celebrate people when they are alive. One of the things I have noticed about this generation is  that we do not put emphasis on learning from elders, particularly people whose careers have  spanned years. Baba’s career has spanned for 65 years and we are hoping a day will come when  Gtext will celebrate 65 years as a company. We are 12 years as a group of companies, but Gtext  Homes is five years today, and we hope to stay around for a long time.”