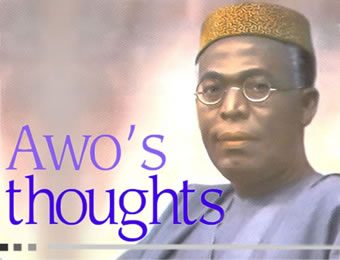 I thank the Vice Chancellor and his colleagues very much for the honour which they have done me by inviting me to deliver the first of the University of Lagos Annual Lectures.

In his letter of invitation to me, the Vice-Chancellor had proposed five subjects, all of which are equally attractive, and difficult to treat, I have, therefore, chosen the one which I consider would have wider appeal and interest, and comparatively less intractable to treat than the others. It is THE PATH TO ECONOMIC FREEDOM IN DEVELOPING COUNTRIES.

It is necessary, at the outset, to describe and define two phrases as carefully and precisely as possible. They are (1.) Economic Freedom, and (2.) Developing Countries.

In economic usage, economic freedom is a phrase of art. It is an inseparable characteristic of the capitalist system It means—for the individual, interest group, or a country—freedom of industry and enterprise. In this sense, economic freedom epitomises what I choose to call the FOUR POSTULATES of capitalism, and its enjoyment is subject to the two fundamental economic forces of (1.) supply and demand or the price mechanism, and (2.) marginal utility or productivity.

The first of the four postulates is the postulate of PRIVATE PROPERTY. The light of the individual to own and control as much economic goods as he can successfully lay claim to, and can appropriate to himself by all legitimate means, is recognised and protected by law.

The second is the postulate of CHOICE. It is assumed that each individual has complete freedom of choice; ‘he may use his energy and property as he thinks fit’, subject only to such restraint as may be imposed upon him by law.

The third is the postulate of EQUALITY. Here it is posited that everyone ‘may work, live and freely contract on a basis of equality with others and with the same opportunity as his fellows.

The fourth is the postulate of EGOISTIC ALTRUISM. Under this postulate it is assumed that by pursuing his economic self-interest, every individual unconsciously promotes at the same time the economic interests of others. The intention of the individual is not generally to promote public interest but his own security and gain. In the process, however, he is led by an ‘invisible hand’ to promote an end which was no part of his original intention. By deliberately promoting his own selfish interest, he promotes that of society more effectively than when he tries more consciously to promote it.

In other words, a country can be said to be free, in the capitalist economic sense, when, under the auspices of supply and demand and marginal utility, it exercises the right to property, to employ its resources as it thinks fit, to manage its affairs on the basis of equity and with the same opportunity as other countries, and to pursue its own self-interest to the exclusion of others.

But, in the context of this lecture, I am using the phrase in a politico-economic sense as applied not to an individual or group of individuals but to a country. In this sense, economic freedom exists when a political sovereign country, independently of outside control or direction, organises exploitation and deployment of its total resources for the benefit of its entire people, under a system in which the forces of supply and demand and of marginal utility are controlled and canalised for the common good.

It is important to bear this distinction in mind for a number of reasons. Firstly, the postulates of capitalism are false and a snare; and the forces of supply and demand and of marginal utility, when they are allowed to operate without conscious control, are injurious to all human freedom. Secondly, it is possible for a country to be economically free in the capitalist sense, whilst the majority of its citizens are enslaved, as was the case in European countries under feudalism and laissez-faire capitalism. The converse of this is also true, namely: it is possible for the citizens to enjoy economic freedom in the capitalist acceptation of the term, whilst the country as a whole is economically enslaved, as is the case with developing countries including Nigeria. Thirdly, economic freedom, in the politico-economic sense, is the opposite of economic subjection, in the same sense, Whilst, in this sense, economic servitude for a country is a concomitant of political subjection, economic freedom does not necessarily go hand in hand with political independence.

Spare us this tension, Comrade Oshiomhole

How CAN polluted churches in Nigeria —Reverend Okesiji