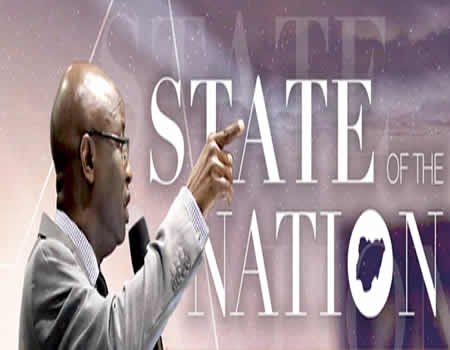 SERVING Overseer of Later Rain Assembly, Pastor Tunde Bakare, on Sunday in Lagos seriously warned against any military coup in the country against the health challenges facing President Muhammadu Buhari, declaring that he was ready to mobilise Nigerians against such intervention, notwithstanding his earlier vow that he was done with marching on the streets of Nigeria.

Bakare, who is also Convener, Save Nigeria Group (SNG), insisted that the president was sick and was quickly recovering but not dead, warning the military and their civilian collaborators, who he said were driven by inordinate ambition, as he likened their end to that which befell both Absalom and Adonijah if they refused to desist in pursuing such ambition.

The cleric, whose address was titled, “Birth Pangs to New Nigeria,” while recalling the evil perpetrated by the military while in power in Nigeria, describing their tenure as years of locust, declared that his threat to mobilise against any military in the country was not a threat but a promise.

This was just as he contended that no country of the world that was on the path to rebirth and transformation today talked of military intervention, citing that as horrible as one might think the US President Donald Trump was, the military was not threatening him.

“Look at what military did to Nigeria. We do not want to hear years of the locust anymore. I have said I am no longer marching, but if they dare, I will mobilise forces of this nation against any military incursion in our polity.

“It is not a threat; it is a promise because they would be taking us back into the woods, pulling the hands of the clocks backwards. Which nation of the world is on the path to rebirth and transformation today talks of the military intervention?

“As horrible as you may think and as bad as Donald Trump is, the military is not threatening him. Theresa May had to conduct election immediately when they said oh you are just a successor you do not have people’s mandate, whether she had majority or not, she went through election. We should not copy evil things,” Bakare said.

Speaking on the health status of President Buhari, Bakare, who led the church to pray for his healing fast so that he could return to the country soon to continue to direct the affairs, contended that only God could determine who would die the next moment and was, therefore, wrong for anybody to wish his fellow human beings dead.

“And finally I said the man in the intensive care unit and the doctor treating him or wishing him dead, we don’t know who would die first. If God said Isaiah back to go and tell Ezekiah that he has added 15years to his life, Oba bi Olorun o is o. He is the only one who can do what he wants to do. Nobody should wish another person dead. We should just pray because we pull Nigeria into disaster should there be any military intervention,” Bakare said.

The SNG convener declared that what Nigeria was passing through now was not new and also not strange, even as he likened it to a woman going through labour pains, warning that “sympathetic undertakers” from taking advantage of the situation as the country would emerge stronger.

According to him, it was the same National Assembly that the Confab report was submitted, querying, “Why are they now asking that the Presidency should transmit same to them.”