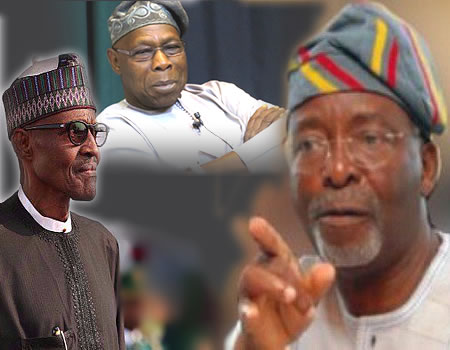 MIXED reactions have trailed the alarm raised by former President Olusegun Obasanjo over an alleged plot by President Muhammadu Buhari to frame him up and thereafter detain him.

The allegation has split leaders along two lines, with many, who spoke with Sunday Tribune berating President Buhari for his penchant for clamping down on perceived critics, while others tongue-lashed Obasanjo over the allegation.

Founder of the Oodua People’s Congress (OPC), Dr Frederick Fasheun, while reacting to the threat, dared anybody to, “on cooked-up allegations,” lift a finger against Obasanjo whom he described as a towering figure and be prepared for a backlash from the Yoruba people.

Speaking with Sunday Tribune, Fasehun, who warned that “Let anybody try anything funny with Obasanjo and see the consequence,” said it would not be possible to jail Obasanjo on unsubstantiated allegation and then jail him on that basis.

“How can you jail somebody like Obasanjo without adequate charges? Obasanjo is like an elephant tied to a narrow string and is being put inside a room. It is not easy.

“What do people think Obasanjo is?,” he queried, adding, “If anybody tries to jail Obasanjo, the Yoruba people will make such a noise, the whole world would go deaf. So, I don’t think it’s possible.

A former deputy national chariman of the Peoples Democratic Party (PDP), Chief Olabode George, on his part, implored both President Buhari and Obasanjo to sheath their swords and resolve their differences behind the curtain in the interest of the military profession they both belonged, declaring that Nigeria is greater than anybody.

George made the appeal in a statement entitled, Buhari and Obasanjo: Let’s Sheath the sword, a copy of which he made available to Sunday Tribune, saying he was, however, making the appeal in a “non-partisan arbitration,” even though he belongs to an opposition party.

This was just as he said that he remained committed to his party, PDP’s insistence on restructuring of the Nigerian union to ensure democratic balance, equity, and the ingredients of fairness.

“I have read Chief Olusegun Obasanjo’s statement about the threat to his life with conscionable, natural concern. I have also read the presidency’s rejoinder which implied that there is nothing sinister in their motives,” the PDP chieftain, who is also a retired military officer, said.

“Chief Obasanjo is a man of towering distinction and excellence who ruled this country both as a military head of state and as a civilian president. He is an international figure who is motivated by patriotic fixity.

“President Muhammadu Buhari is equally a patriot, a gentleman and officer whose totality of vision is about the growth and welfare of our common wealth.

“As a military man, I know these senior officers very well. I have worked at close quarters with the two of them. I have no doubt about their selfless commitments to our nation.

“Naturally, we can disagree, raise our voices, stamp our feet in disapproval, but never in the open. The essence of the esprit de corps is about mutual felicity and respect for each other. Pray, let’s keep it that way. Nigeria is greater than all of us.” Ekiti State governor, Chief Ayodele Fayose, however, urged Obasanjo to submit himself for probe by the Buhari administration, saying the former president should also take his current travails in his strides.

The governor said Obasanjo should not make his predicament a Yoruba issue, adding that it was good that Obasanjo was now being served the goodies he saw in Buhari that made him Buhari’s promoter during the 2015 general election.

In a statement by the governor’s Chief Press Secretary, Mr Idowu Adelusi, the governor also advised Buhari that what goes around, comes around.

“To me, former President Obasanjo should submit himself for probe and trial. He gave us the impression that he is a brave man who is not afraid of anything. He is a  former General in the army who has seen a lot and should not be raising the alarm now. Obasanjo said Buhari was the best for Nigeria while promoting him for the 2015 general election.

“Obasanjo even used those bodies to hound and lock up many people including state governors. Why is he now afraid of being probed? Let him tell Nigerians how he made his money. People can recollect the level he was before he became president and how he left office. If Buhari is now telling the whole world that Obasanjo stole money, it is incumbent on Obasanjo to prove his innocence.

“In fact, I am laughing at the whole scenario. That Obasanjo could cry out. I don’t know he can act like a woman. It is amazing that he is behaving this way. If he has anything to clarify, let him do that,” Fayose said.

Obasanjo called for it —Unongo

A Northern Elder and former convener of the Northern Elders Forum (NEF), Chief Paul Unongo, said whatever Obasanjo was alleging that the present government was planning against him,  he called  for it.

Speaking in a telephone interview on Saturday, the northern leader, who took a swipe at the former president, remarked his action towards a sitting president was totally wrong and undeserving.

‘Whatever wrong he felt Buhari must have committed or is doing, he should have taken into cognisance that as a former president and his boss in the military, he should have a better way of communicating to him or advising him.”

According to Unongo, who is a former Minister of Steel in the Second Republic, to castigate and degrade  a sitting president and a General like him without recourse to the office, is unacceptable and morally wrong.

‘So, whatever he feels now, I think he deserves it and whatever happens to him, he should blame himself. As a former leader, he has access to President Buhari and it is  not by  going to the media.”

Threat to OBJ is an invitation to chaos —Middle Belt

The Association of the Middle Belt Ethnic Nationalities (ASOMBEN) warned that any attempt to carry out the plan will not only attract international condemnations but could be an invitation to chaos.

The national chairman of ASOMBEN, Mr SuleKwasau, said the moves by the All Progressives Congress-led government to gag the opposition and critics would further soil the image of the government and expose its anti-democratic tendencies.

“Our advice is that those behind the moves to frame up the former president and other critics of the administration should consider the consequences of their plots and refrain from such before it is too late.

“This is exactly what we experienced during the military era and the present government wants to re-enact the same scenario to gag the opposition and critics of the administration. This unpatriotic behaviour will definitely heat up the politics the more,” he warned.

Reacting to Obasanjo’s claim in a telephone interview with our correspondent in Port Harcourt, Prince Tonye Princewill, a former governorship aspirant in Rivers State, described Obasanjo’s claim as a false alarm.

He said: “It is better we see the substance of what he is talking about, but as far as I am concerned, the former president is just raising false alarm.”

The president general of ‘Mdzough U Tiv and spokesman for Benue pan-socio cultural group, Chief Edward Ujege, described the threat as ‘witch hunt’.

But former federal commissioner, Public Complaints Commission in Benue State, Alhaji  Abubakar Tsav, said the alarm by the former president showed he was only afraid of his past.

But, Ujege said that the development was deadly for the nation’s democracy, stressing that the present administration just wanted to silence everyone that might frustrate the second term aspiration of President Buhari.

According to him, “it is not a surprise at all. The present administration just wants to get back to office by force.

“It is very bad for this administration to want to suppress the former president because he has been outspoken against the failure of the government of the day”.

“And they are doing this to clamp down on anyone that will want to stand on their way”.

However, Tsav said that probing the former president would show that the present administration was serious about the fight against corruption.

In his reaction, Professor Sani Abubakar Malami of the Abubakar Tafawa Balewa University Teaching Hospital, (ATBUTH) Bauchi said: “ I was shocked to read the allegations by former president Obasanjo. Shocked, because I had not perceived that the relationship between him and Buhari had degenerated to such an extent. From all indications, the battle of the Generals will be long and bloody”.

In her own reaction, a member of the Bauchi State House of Assembly, Maryam Garba Bagel said:  “The former president is a controversial man. He may be looking for someone they can drown together in his latest unsuccessful campaign against the president.

The senator representing Delta North District, Peter Nwaoboshi described, as a bad for Nigeria, the allegation made by Obasanjo that the government had perfected plans to incriminate him.

“It’s a bad omen for Nigeria. It’s a bad omen if such a thing can happen to a former president. It’s a very sad one. It calls for a sober reflection.

“Where’re we going? If former president, Drr Goodluck Jonathan had done such a thing, would we get to where we are today,” he queried.

According to the former Delta State PDP chairman, “it’s unfortunate and you know Obasanjo is not that type of person that’ll just talk for the sake of talking. He has his own information.

The Kano State chairman of PDP, Senator Ado Doguwa, described the allegation by Obasanjo as weighty and should be handled with concern and not with kid gloves.

He urged Buhari to always accord past leaders who had served the country before him some respect.

Cholera in the college: Students blame govt for refusing to repair faulty borehole

Kuli kuli: Made in Nasarawa, cherished in South west, others