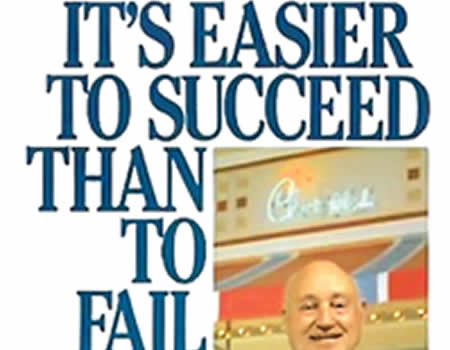 Every so often it’s good to revisit words of wisdom from one of America’s most successful business leaders, Truett Cathy, founder of Atlanta-based Chick-fil-A. This remarkable man came up with this provocative way of explaining success: “It’s easier to succeed than to fail.”

That’s the title of his first book, written a quarter-century ago, giving insights into how he built the second largest fast-food chicken chain in the country. It all began in 1946 with one small restaurant near the old Ford plant in Hapeville.

And Cathy insisted from the outset that his restaurants be closed on Sunday “as our way of honoring God and of directing our attention to things that mattered more than our business.”

That tells it all in terms of his commitment to his principles. Even while building his business, Cathy taught a Sunday school class of 13-year-old boys, undoubtedly a source for his second book, “It’s Better to Build Boys Than Mend Men.”

“Failure exacts a high price in terms of time when you have to do a job over.

“Success eliminates the agony and frustration of defeat.

“Money spent to fail must be spent again to succeed.

“A person’s credibility decreases with each failure, making it harder to succeed the second time.

“Joy and expressions of affirmation come from succeeding, whereas feelings of discouragement and discontent accompany failure.”

Cathy offered “three keys to success that work for all people under every circumstance.”

Expanding on those keys, Cathy lists other steps for business success on his website. One especially resonates: “Never lose a customer.” Whether delivering newspapers as a boy or running his restaurants later, Cathy said, “I have found that the most effective way of promoting my business didn’t cost me anything but a little kindness to my customers.”

Cathy adds to that on his website: “Nearly every moment of every day we have the opportunity to give something to someone else — our time, our love, our resources — and I have always found more joy in giving when I did not expect anything in return.”

It’s easy to see why, for Truett Cathy, “It’s easier to succeed than to fail.” Not only in business, but in all aspects of life.