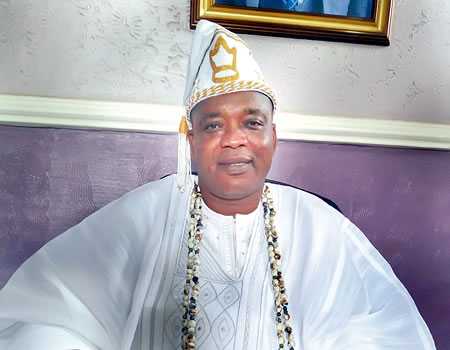 The first appearance of the newly crowned Olowo of Owo in Yewa South Local Government of Ogun State, Oba Mojeeb Alao at the Council of Traditional Rulers recently, witnessed unusual human traffic in Ilaro as sons and daughters of Owo led him to the venue to underscore their unalloyed solidarity to him. TUNDE BUSARI examines the four months the royal father has spent thus far.

Between 1955 and 1989, his father, Alhaji Babatunde Alao, was the Baale of Owo, a town in Yewa South Local Government of Ogun State. During his 30-year reign, the Baale would take his little Mojeeb on his galvanised, ‘snow white’ Releigh Bicycle to all the 16 villages under his authority. From one village to another, he would tell him a few things about each place and feed him with some information which incidentally are, today , the young Alao’s most prized treasure as the substantive Olowo of Owo. Being an innocent toddler, he did not see the big picture in his father’s lens.

But when, a few months ago, the mantle of leadership of the town landed on him, he had a flashback and gave thanks to his father and, indeed, his creator for seeing him through the voyage of his life from a struggling childhood to a man of opulence.

His ascension to the throne after the passing on of his immediate predecessor, Oba Patrick Oyeniran, followed a natural succession, with his entire Alao Bankole Ruling House unanimously forming a queue behind him in a show of undisguised love to one who, long before then, had consistently committed his resources to the development of the town without waiting for any returns. He had wormed his way into the heart of the late Olowo through his community service and the late monarch intuitively saw a bright future ahead of him and encouraged him through regular contacts.

“Whenever Baba was returning home from Yewa Traditional Rulers Council meeting, he would have a stopover in my office at Owode. If I was not around, my secretary would call me, and I wouldspeak with him and do what a son must do for his visiting father to Baba. Also, whenever I was in town, I must go to the palace to see him. He was such a pleasant Kabiyesi who loved our town and the development of the town.

“His love was one of the things that encouraged me to do the little I did in the town during his reign. He showed genuine love to the development, and I shared that vision. It is just unfortunate that he would depart at the least expected time. But I know that God sees clearly what is hidden to human beings. He is a patient God but who would not allow any sinner against his creature to go unpunished,” he declared.

Reminded of the selection process which resulted in his emergence and eventual coronation at a well-attended event held in April 2019, he gave credit to the succession procedure as contained in the agreement signed on June 10, 2004 which states that after the reign of the incumbent Oba Oyeniran, Alao Bankole’s Ruling House would take the next turn.

Expectedly, that arrangement was followed to the letter after the Ifa oracle had picked him. The kingmakers too had no problem in giving their nod to the process supervised by the local government. It was learnt that three ruling houses, namely Fasinu, Alao-Bankole and Gbolohunkan reserve statutory right to the throne.

Saturday Tribune also gathered that Owo came into existence through spirit of unity among three groups drawn from Yoruba, Anago and Egun, in the 16th Century. The three converged at the community and derived its name, which subsists till date, from that marriage of convenience. That unique history aids succession to the throne and removes controversy as well as conflict among the ruling houses.

“I am pleased to tell you that the arrangement has made my town to enjoy permanent peace among the people and those who came to live with us. We don’t have any reason to engage in noise over who to succeed the king. As I speak now, when I am old enough; when the time to return home comes, the next ruling house to present candidate is known.

“There is no controversy about it. I am giving praise to our fathers who, in their wisdom, made and agreed on this peaceful arrangement. So, when the issue of succession came up, I emerged with unanimous decision of the kingmakers who represented the voice of the generality of the town. I appreciate them for preserving our tradition, and nothing will stop me from also preserving the tradition for the best interest and growth of the town,” he stated.

Indeed, Owo is steadily ascending the ladder of growth among its contemporaries in Ogun State with rural electrification project in street light being undertaken by Oba Alao. In addition, unlike what obtained in the past when travelling from Owo to Badagry was an equivalent of journey to a new world because of need to pass through Agbara with associated traffic snarl, the trip now comes with ease. Yewa-Akashi River has been dredged, and Oba Alao bought a canoe equipped with 10 units of life jackets, thereby diverting Badagry-bound travellers from the troubled road to the water in voyage which offers best of pleasure to passengers and crew.

“What my people passed through, travelling from Owo to Badagry, is not something which one should experience. It was usually a painful experience. I was not comfortable hearing their stories, so I decided to work on the river. I went to the state Ministry of Environment and brought dredging machine, which now makes the water passable for canoe. The canoe which I bought is already operating and making journey to Badagry so easy now.

“I am on the throne to set standard and encourage other lovers of my town to come and contribute their own quota to the development of the town according to my vision. I also bought and supplied power generators to Osada so improve night market. I bought exercise books for 17 secondary schools. I am also going to extend street light to Sagboke, Ijako, Ajise, Odan, Osada, Okojoba and others,” he promised.

It is on record that his well acclaimed compassion for his town long before he ascended to the throne was as a result of his struggle against the tide of looming poverty. From Royal Catholic Mission Primary School to Owo High School and finally to Muslim Progressive High School, he made hard work his second religion, and since then, he never lost focus of his journey to prominence in life, hence his interest in estate development after some fruitful sojourn in Europe. Today, his property development company, in addition to his hospitality concern, has earned him respect among eminent personalities in Ogun State.

Having earned the faith of his subjects resident at home and outside the state, Oba Alao is adapting fast with other traditional rulers in his local government, evidence of which was recorded at his inaugural attendance of traditional rulers’ council meeting. Success of that memorable outing notwithstanding, the outspoken Olowo is seeking more support of other members of the council in order to form a more united forum. He appreciated the leadership of the paramount ruler of Yewa, the Olu of Ilaro, Oba Kehinde Olugbenle, describing him “as a bridge builder who has demonstrated unequalled passion for Yewa traditional rulers.”

“His leadership which I met has impacted positively on the entire council. I am happy to be part of them. I can only call upon every member of the council to extend same support which they gave to my predecessor. Together we shall take the council to the next level of progress,” he said.

While some traditional rulers would look back to their life before the throne and sing a song of lamentation, Oba Alao said he is enjoying every minute in the palace serving the people of his town. He added that being on the throne is equivalent to his retirement from his career as a estate developer.

“If you claim to love your town and find yourself on the throne, you should see it as opportunity to increase the love for your town. A traditional ruler is supposed to lead by example, spending his resources in the cause of the development of his town. This is what I am doing here, and I am happy that my people appreciate it,” he said.

‘Crazy’ things churches do in UK to attract youths