Trader calls Buhari, Okowa for help over demolition of 11 shops in Delta 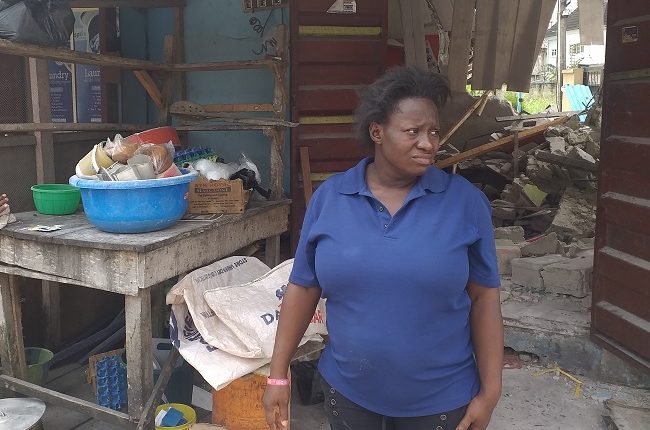 A trader, Mrs Tonia Gbemre, on Friday, appealed to President Muhammadu Buhari and Senator Ifeanyi Okowa to come to her aid over the demolition of her 11 shops in Effurun, Delta State.

The 11 shops located at Plot 1, Block 1 in the New Layout Estate, Ugboroke in Uvwie Local Government Area, were demolished early morning of Friday along with property in them by agents of the state’s Ministry of Lands, Surveys and Urban Development.

The shops were a source of livelihood and entrepreneurial training for Mrs Gbemre, her tenants and several youths who could not lay their hands in any white-collar job.

Mrs Gbemre, in a distressed tone amid hordes of displaced shop owners, lamented the emotional trauma she had been through since the destruction of her source of income on Friday morning.

In a chat with journalists at the site of the demolished shops, Mrs Gbemre explained how she bought the plot of land at N7.5 million from one Mrs Eunice Abiri in 2014.

She disclosed an earlier demolition of the fence she built-in 2014 during a road construction into Haven Homes Estate
in which she sought a reprieve in court for damages, but the judgment was yet to be delivered.

She said on buying the land while waiting for approval papers from the ministry after allegedly paying N670,000 to Mr Emmanuel Ebi Temewei, she decided to build the temporary shops to dissuade encroachment.

Mrs Gbemre added that Mr Temewei an officer with the Ministry of Lands, Surveys and Urban Development, Uvwie LGA, was yet to allegedly return her money or approval papers when he allegedly led over 20 armed policemen to demolish the shops without prior notice.

“I’m begging President Buhari and Gov Okowa to come to my aide. My land is a small one. I’m a trader. I’ve spent over N200 million on the shops,” she pleaded.

One of the tenants of the shops, Mrs Lora Ellington, who also spoke to journalists, decried the cruel manner her shop was destroyed along with her baking and catering tools with no prior notice.

Mrs Ellington, a graduate of Mass Communication, whose lack of job led her to catering entrepreneurship, said she had a job to deliver Friday afternoon, but met her tools and wares destroyed.

“They’ve destroyed my gas cooker, oven, show glass, baking flour, bread slicer, and I and my six workers are stranded as you can see,” the mother-of-three lamented amid tears.

Meanwhile, Mr Temewei, when contacted, denied having knowledge of Mrs Gbemre let alone collecting money from her, just as he denied supervising the destruction of the shops.

“What’s all this about people calling me over the issue? I’ve told you, people, that that exercise was not carried out by me. Refer all your comments to the commissioner,” he yelled.

Controversial Catholic priest and Spiritual Director of Adoration Ministry, Enugu, Nigeria, (AMEN), Rev Fr Ejike Mbaka, has taken a swipe at President Muhammadu Buhari and past leaders of the country demanding that the President should apologize to the country, especially the youths, on behalf of himself and his predecessors, for causing Nigerians so much pain…Trader calls Buhari

THE crème de la crème converged on Kaduna on Saturday for an epochal 50th anniversary of Arewa House, otherwise referred to as the Centre for Historical Documentation and Research. Apart from the stimulating lecture delivered by the chairman of the Nigeria Governors’ Forum (NGF) and Ekiti State Governor, Dr Kayode Fayemi, the occasion brought together a galaxy of politicians of different affiliations, academics, former top military brass and foremost traditional rulers from the entire 19 states making up the northern axis of the country…Trader calls Buhari